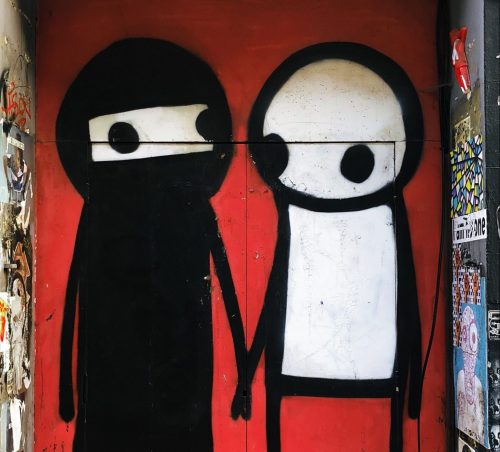 Unity in the community, or, how I learned to get along with my enemies

Unity in the community, or, how I learned to get along with my enemies

Who am supposed to hate, again?

For years I taught a graduate class, Identity Conflict, and I would begin the term by noting that trying to list the composite identity elements of any one individual would show that, indeed, we are unique. No two humans share an exact measure of identities. Even twins billed as “identical” have identities that are separate, if only “born first,” and “born second.”

My tribal labels: white, boomer, male, Green/Democratic, professor, pacifist (except to mosquitos and rats), and much more. Your tribal labels extend into many permutations of your primary identity, carving out your unique identity now and forever on this Earth.

Nonetheless, we manage to stress one identity on many days, and allow that to create borders and even conflicts with those who do not share that one aspect of Who I Am. That frequently erupts into conflicts small and large, internal and between peoples. Those who hold multiple identities are often caught in the middle: One study looked at the effects on Muslim girls in British schools and the challenges faced by both the girls and the schools. Another examined the devoutly religious who are LGBTQ+ and subjected to exhortations to “pray the gay away.” These pressures can fracture communities and damage innocent people.

In my field of Conflict Transformation, we know that loss intensifies that aspect of identity and sets up a typology of identity: Us vs Them. My field is highly interdisciplinary; we borrowed this identity-intensification-as-a-legacy-of -loss from a cross discipline, Social Psychology. It’s basically the collective version of passive-aggressive behavior. The narrative is: We were defeated and now we hate them forever, we nurse the desire for revenge in our private circles, we gather our forces behind the scenes for as long as it takes (even generations if needs be), and then we strike.

Welcome to Hitler’s Germany, striking back after WWI and the retributive Treaty of Versailles. Say hello to Rwanda following the brutal colonization by Belgium and the favored treatment of the Tutsi population. We’re looking at you, Palestine, since your land was stolen, and you are second-class citizens at best. And of course, we have our frustrated men from former Confederate states, whose ancestors lost the US Civil War. This list is virtually endless.

So, we will expect that forever, or until wars either escalate to thermonuclear Apocalypse or consume and spew out so much carbon we kill the climate and ourselves in the bargain (is anyone tracking the carbon bootprint of the war in Ukraine, for instance?). Destructive conflict, often fueled by identity, may be the ultimate undoing of our species.

I was a Conscientious Objector during the Vietnam War, born in 1950 and thus turned 18 during the most furious part of that war, the Tet Offensive. I am supposed to hate my brothers who served in combat in that illegal, immoral war.

I don’t–never have. As soon as the first of my friends came home, all that tension evaporated and was instead redirected entirely toward the Johnsons and Nixons and Dow Chemical executives and all those who profited. Of course, my first friend who came home did so in a wheelchair for life, a good-looking, friendly big brother to one of my closest friends, a kid who was kind to all of us, someone whose smile remains in my minds-eye, my minds-heart.

Hate? I just say no.

Fast forward to our current time, and the Patriot Prayer (local Proud Boys hereabouts) are supposed to hate me and I am bound to hate them. I mean, my sons are African American and they are white supremacists. I am for peace and they want violence. I am disarmed; they are armed.

But we get along. They have literally reached out to me to shake my hand. I can place my hand on the shoulder of the biggest and baddest of them, and I have.

Why? Why stop hating the terrible conniving rotten Other who clearly wants you dead?

Because the hate only feeds more hate, more destruction, more violence, more useless continuation of wreckage. Unless some people simply stop, however unilaterally that might be, the hate will never vanish. It may go under some rock when social norms force it there, but it is like a peat bog fire just waiting under the surface, for years sometimes, before conditions allow it to erupt into a raging wildfire.

How? How to drop the hate?

For me, as a member of an unarmed public safety team, I know, as all of us in this practice know, that we will often be required to just do so unilaterally, to “take one for the team,” and to understand that when we are disrespected, insulted, or even assaulted, it is never in service to the community to respond with hate, nor to mirror disrespect, but to instead regard ourselves as in service to the well-being of the community, even if only for a limited time.

No one is afraid of us. No one holds a grudge against us. We do not dissemble; no one on our team nods in agreement when someone yells a sexist slur, a racist rant, or any other offensive act. But neither do we debate them.

Instead, we seek clarity, we ask, we listen. We affirm what we can.

One young woman told a highly offensive anti-Islam counter-protester, “Sounds like you really care about this country.” Her accurate observation did not affirm his point of view, but it de-escalated him and they had a discussion. She listened for several minutes, asking small clarifying questions, and then, shockingly, he asked her a couple and listened to her. Up until she approached him, he had been live-streaming his racist rants. Once they started talking, he turned off his camera. Not only did she take him out of play for about 45 minutes, she helped diminish the hurtful tone of the counter-protesters substantially, since he was the alpha male of the group.

This young woman is an Iraqi immigrant, a former refugee who fled the war with her mother. She is brown-skinned and was covered, fairly obviously a Muslim. The man was literally wearing a t-shirt that said, “Stop being Muslim.”

That young woman is our hope for an end to hate. We can do this. We need her emotional maturity, her willingness to absorb the hate and transform it into understanding, which then, in turn, becomes the weapon that diminishes and even banishes and vanishes hate.

There is hope. Humans have it in us. May 2023 show so much more of this healing.