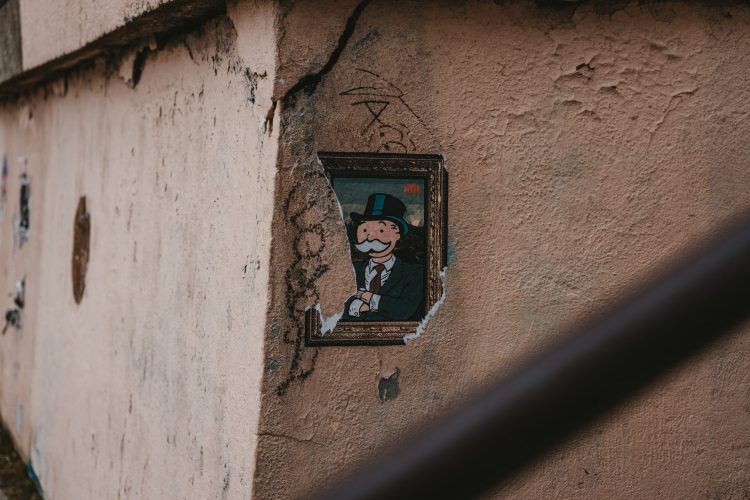 Justice, it seems, is hard to find. Thousands of grassroots organizations across the country seek justice for their concerns. In the US, some 13,785 nonprofits work for civil rights and social justice. Organizations focused on international justice such as peace, refugees, and international aid number 23,532. There are 27,402 environmental groups.

From peace to prison, the environment to economic inequality, many Americans fight for their cause, plead for justice. The dynamic is similar in other countries.

Who, or what, are the forces behind so much injustice and suffering? Is there a common culprit, a common thread or threat?

In 1971, Lewis Powell, soon to be placed on the Supreme Court by Richard Nixon, was a high-powered corporate lawyer sitting on the boards of almost a dozen corporations when he penned the Powell Memo, a letter directed to the Director of the US Chamber of Commerce. Powell expressed his grave concern that American business and free enterprise were under full-scale attack from “leftists” and might altogether collapse unless drastic steps were taken.

Powell identified academia, the news media, television, artists, preachers, teachers, Ralph Nader specifically, and certain politicians as being the most articulate and attractive purveyors of this “chorus of criticism” designed to bring down all of American business. Action must be taken, and now.

Citizens were challenging big business, holding them accountable, demanding governmental oversight, exercising their democratic rights. To Powell, the corporate lawyer and perennial corporate board member, this was a bridge too far. The chorus must be killed, power returned to the kings.

The future Supreme Court Justice went on to outline in detail how the corporate world must retake control and influence over every aspect of American life.

Academia must be seeded with professors sympathetic to big business, textbooks reviewed and evaluated, guest speakers deployed on campuses to counter the narrative. Powell wrote that corporations provide lucrative contracts and benefits to colleges and universities, and these should be used to influence precisely what occurs on a college campus.

Powell made a similar argument about the media. News organizations are owned by corporations, and they too must be persuaded to realize that their corporate profits hang in the balance if they continue to publish stories unfavorable to American business. Stories about consumer rights and environmental rights must stop. The same for television, a medium Powell highlighted as perhaps the most effective source of information, or disinformation.

The political arena must not be neglected, said Powell, because “political power is necessary; such power must be assiduously cultivated; and when necessary, it must be used aggressively and with determination — without embarrassment and without the reluctance which has been so characteristic of American business.” In other words, no holds barred. Lean on public servants in a way they have never experienced.

Paid advertisements, the courts, stockholders, lobbyists, writers, think tanks, and the Chamber of Commerce itself with its hundreds of chapters across the country must all be utilized, weaponized in this war against the chorus of critics.

To read the Powell Memo today is deeply disturbing, not just because it was written by a future Supreme Court Justice who was advocating a corporate takeover of American democracy, but also because the actions detailed were so successfully deployed and completed. Powell was prescient. His plan worked. And the average American pays the heavy price today.

In the United States, power no longer lies so much within the halls of Congress or the White House, but within the corporate temples.

Our foreign policy, our diplomacy, our war-fighting strategy, are all influenced and dependent upon corporate weapons manufacturers with their legions of lobbyists depositing $285 million into the campaign war chests of candidates across the country, spending a total of $2.5 billion in lobbying over the last 20 years. The US Supreme Court opened the doors to such unlimited corporate campaign spending in its Citizens United decision.

Fossil fuel companies turn up the heat on all of humanity such that we are increasingly suffering from climate catastrophe, all so they can rake in record profits. Working hand in glove with weapons manufactures and the media, they foster war and generate enormous revenue for each, using lawyers and lobbyists to implement their cancerous policies.

Many colleges no longer teach or even believe in a broad-based liberal arts education, but rather are technical training schools for investment banks, marketing firms, law firms, accounting firms, weapons manufacturers, and conservative or military think tanks. With the funding of buildings, research grants, and faculty chairs, the corporate takeover of our intellectual life is virtually complete in many public and private institutioins. Students can travel through four years of college without a course in American government, history, or literature, resulting in a woefully uninformed electorate.

Prisons are privatized and corporatized thereby influencing criminal justice reform. Schools are privatized and corporatized thereby influencing the development of young minds. Our media, and more importantly now, our social media, is owned by corporate oligarchs who influence the narrative fed to us each day, a narrative designed to keep people scared and pitted against each other.

Thanks to Powell and his colleagues, the planet now faces multiple crises, and perhaps extinction, by way of corporate hand. The danger is real, existential, measurable. The dead can be counted. The homeless, the hungry, the drought stricken, flooded, burned down, and the war-ravaged form a chorus of suffering. Corporate profits, CEO salaries, lobbying expenditures, and tax cuts reveal the why and how.

ExxonMobil, Shell, Raytheon, Lockheed Martin, Vanguard, Blackrock, Northrop Grumman, CoreCivic, and all their kin have staged a hostile takeover of government and the daily life of its people. They hold the reins. They are the common thread and threat. Until corporate monoliths are disassembled and defanged, justice will be increasingly scarce.