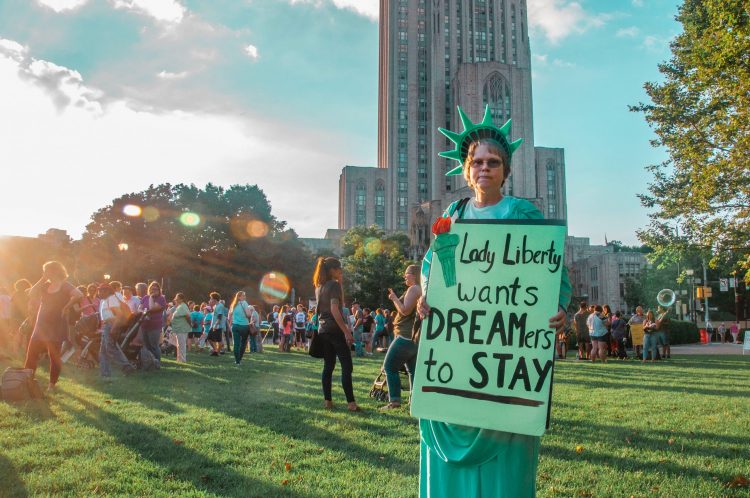 DACA and the politics of cruelty

DACA and the politics of cruelty

It wasn’t long ago that we awoke to images and stories of families separated at the border, of migrant children locked into dirty, crowded, chain-link pens. For many Americans, this was an alarming introduction to the politics of cruelty that have played out in different periods of American immigration history, but with particular force in the past few years.

Today that politics is moving back into the media spotlight. As I write this, it’s not yet clear whether DACA, the program created to protect from deportation the young people brought here as children, will last much longer. In response to a lawsuit brought by the attorney general of Texas and several other states, a federal judge ruled last year that the program was illegal, and his ruling was upheld this past October by the U.S. Court of Appeals for the Fifth Circuit. Unless legislation is passed during this year’s waning congressional session to extend the protections afforded to DACA recipients, the case may go to the Supreme Court, where its prospects would be dim.

If DACA is ended, it’s unlikely that the 590,000 young people currently protected by the program will be deported, but they would no longer have the federal protections that have allowed them to work and secure other benefits. They would be pushed back into the shadows and precarity of undocumented status.

That is where the politics of cruelty come in. For this particular kind of politics is not only about policies like family separation, which were intentionally designed to inflict suffering and ostensibly “deter” migrants from coming to the U.S. The politics of cruelty also incorporate a language, a discourse, that casts migrants in dehumanizing terms (“illegal aliens”), presents them as threats to Americans’ physical and economic security, and excludes any reference to America’s need for immigration to maintain a robust economy and revitalize communities.

There is every good reason to extend protection, indeed, permanent status, to DACA recipients, and no good reason to deny it. With the umbrella of the program protecting them since 2012, DACA recipients have been able to go to college, enter professional careers, start families, buy homes, serve as essential workers during the continuing pandemic, and pay their fair share of federal and state taxes.

In short, America is their home, and they have every right to a permanent status that legislation can bring. That is why major political organizations like the U.S. Conference of Mayors have supported such protections, and why business organizations like the U.S. Chamber of Commerce have called for legislative action on the recipients’ behalf. Polling data from recent years has consistently shown that a majority of American voters support the continuation of DACA or permanent status for DACA recipients.

Certainly, protecting DACA, or giving a pathway to permanent status for DACA recipients in this congressional session, represents a contraction of the original, ambitious Biden administration goal of extending a path to citizenship to the 11.5 million undocumented individuals in America. This contraction only goes to show the power of the opposition to substantive reform. Still, in light of this opposition, the achievement of legislated protection for 590,000 people would represent a significant accomplishment indeed.

As of now, a proposed “bipartisan framework,” co-created by Senators Kyrsten Sinema (I-Arizona) and Thom Tillis (R-North Carolina), is floating in the Senate. It would provide a path to legalization for DACA recipients, but it would also be accompanied by border security measures that include an additional $25-$40 billion for increased staffing and pay raises for border agents. It also would provide for the creation of regional “processing centers” that would house asylum seekers and ostensibly expedite the processing of their asylum requests. Until such centers would be operational, a Trump-era policy known as Title 42 would remain in effect, turning migrants back to Mexico and preventing them from filing asylum claims. This policy had been set to expire this December 21.

Protecting DACA recipients is a stand-alone human rights issue that should have no place in negotiations over border security, particularly when those negotiations involve the suppression of other migrants’ rights. That said, there remains formidable opposition even to the Sinema/Tillis framework, an opposition fortified by the filibuster rule that requires a 60-vote supermajority in the Senate. If the current Congress, with its substantial Democratic House majority, fails to extend protection to DACA and its recipients, the failure will represent a victory for the politics of cruelty, a politics powered by demagoguery and the fears it generates.

It will mean, too, that the struggle for human rights will continue, sparked by the kind of organizing and truth-telling that helped push DACA into existence a decade ago. And it will mean, more clearly than ever, that it’s time for the filibuster, that onerous impediment to democracy, to be relegated to the dustbin of history, where it has long belonged.