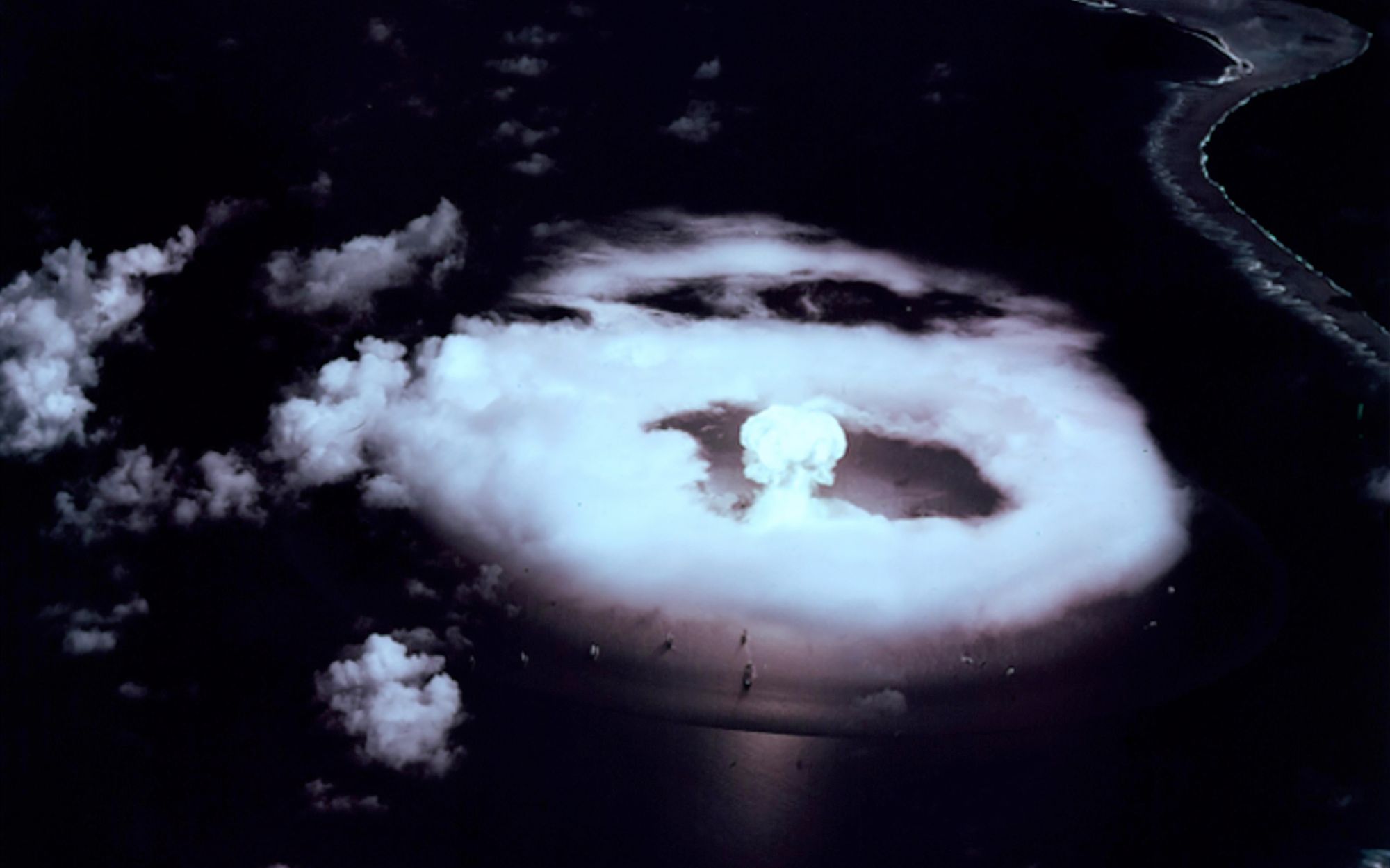 The parallel universe of peace

The parallel universe of peace

Here’s a piece of paradoxical news that puts even the looming U.S. presidential election in perspective: Nuclear weapons are now (or soon will be) . . . good Lord, illegal.
Armageddon is against the law!

Well, sort of. And the Trump administration doesn’t agree. Indeed, no nuke-armed nation has, as far as I can tell, anything but contempt for this infringement on its right to blow up the world (only if necessary, of course). War and peace, it seems, exist in parallel universes.
In the pro-war universe, as explained with succinct clarity by Nuclear Ground Zero in a three-minute video, it takes five minutes for a U.S. president to launch a war. An aide carries a briefcase full of nuclear codes — this is the “nuclear football” — literally everywhere the president goes; and if the president decides that now is the time, he issues his encrypted order to the Pentagon war room, then responds to the “challenge code” the war room officer presents to him. The correct response is “on a little card” the president carries.
“It takes five minutes to launch a war. . . . It’s as easy as ordering a pizza.” And there’s no way to stop a missile once it’s been launched. “The whole process, from the president opening his briefcase to missiles being launched can take as little as five minutes. Millions of people will be dead faster than Domino’s can get there with your pizza.”

Human progress! This is the world we have created in our pursuit of dominance over Planet Earth and one another, lo these past ten thousand or so years. We have made it to the edge of the void, the brink of global suicide and non-existence, pushed along by a sense of glory and power and fear of the enemy, who, it turns out, is none other than ourselves. Humanity has pursued the opposite of this as well, but peace — connectedness, “love thy enemy as thyself” — is profoundly more complex to grasp and understand, and those who believe in war have successfully contained it so far.
This is the context in which I consider the Treaty on the Prohibition of Nuclear Weapons, which was approved by the U.N. General Assembly in July 2017 by a vote of 122-1. The debate on this treaty — which proclaims that no nation can “develop, test, produce, acquire, possess, stockpile, use or threaten to use nuclear weapons” and holds nations responsible to remediate the environmental and human damage they’ve caused by nuclear testing over the last 75 years — was boycotted by the United States, Russia, China, the U.K., France, India, Pakistan, Israel and North Korea . . . hmmm, what do these countries have in common? Oh yeah, they all possess nuclear weapons. Also boycotting the debate and vote were their allies, including all the NATO countries.

After its passage, the treaty then had to be ratified by 50 countries before it could become international law. That happened in the past week, when Honduras became the fiftieth nation to do so. That means, according to the International Campaign to Abolish Nuclear Weapons: “In 90 days, the treaty will enter into force, cementing a categorical ban on nuclear weapons, 75 years after their first use.”

OK, but what does that actually mean? First of all, the prohibition against development and use of nukes applies only to the treaty’s signatories, which only include countries that are nuke-free anyway — which means this isn’t a law in any pragmatic way but, rather, a commitment. And while I do not disparage such a commitment, I have to ask how it brings us the least bit closer to actual global nuclear disarmament.

Well, according to The Guardian, “campaigners hope the treaty will have the same impact as previous international treaties on landmines and cluster munitions, bringing a stigma to their stockpiling and use, and thereby a change in behavior even in countries that did not sign up.” They also suggest that military-industrial companies will begin feeling pressure to stop producing nuclear weapons because financial institutions will stop investing in them.

This adds up to an enormous imbalance between war and peace. We can start a nuclear war in five minutes, faster than we can order a pizza. But it took the world 72 years after Hiroshima and Nagasaki to officially declare nukes illegal (for some), and another three years to ratify that declaration, followed by a hope that this is the beginning of stigmatizing nukes sufficiently so that someday the nuclear powers will surrender their weapons voluntarily, or at least stop developing new ones.

Meanwhile, the Trump administration has declared this treaty “dangerous” and has urged signatories to withdraw their support. I note also that the U.S. president is famous for his fear and hatred of non-white potential immigrants, be they Muslim or Mexican or African, and — speaking of stigmatization — has said that a lot of them are from “shithole countries.” And he has no problem with putting them, or at least their children, in cages.

Think of it! The guy who could start a nuclear war has, in his own mind, already dehumanized a huge percentage of the world’s population. Doing so makes it so much easier to kill them when necessary.

Creating peace requires an enormous growing up, politically and every other way. Those who are committed to peace and global equality are forced to work for it in a world that is seriously prejudiced in favor of war. The path to war is easy and smooth, and nuclear war is easiest of all. The level of spiritual growing up necessary to embrace nuclear disarmament is perhaps best exemplified by South Africa, which played a crucial role in the passage of the U.N. Treaty on the Prohibition of Nuclear Weapons.

South Africa is also the only country on the planet that gave up its nuclear weapons after being in full control of them. When did this happen? Around the same time that it transitioned from an apartheid government to one of racial equality.
Is there a lesson to be learned here?
~~~~~~~~~~~~~~~~~~~~
Robert Koehler (koehlercw@gmail.com), syndicated by PeaceVoice, is a Chicago award-winning journalist and editor. He is the author of Courage Grows Strong at the Wound.