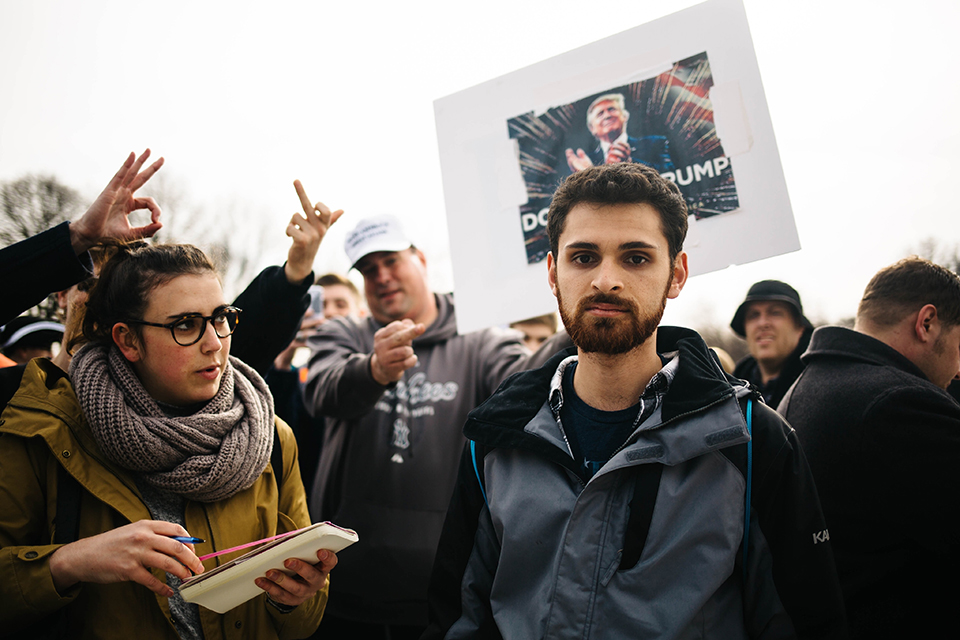 Trump and the lost country

Trump and the lost country

Where, oh where, is the United States of America — global leader, creator of democracy, hope of humankind? It certainly wasn’t up there on the debate stage last night.

When 9-year-olds start slinging insults at each other — “Is not!” “Is too!” — it’s hard for platitudes to step in and re-establish a sense of situation normal. Indeed, the almost total absence of platitudinous rhetoric during the debate may be the one positive takeaway from this bizarre event, which otherwise put a naked president on display before the world, showing off his dystopian immaturity.

The unofficial term for Donald Trump’s condition may well be “hubris syndrome,” as discussed several years ago in an Atlantic article by Jerry Useem, titled “Power Causes Brain Damage.”

Useem, quoting psychiatrists David Owen and Jonathan Davidson, defined hubris syndrome as “a disorder of the possession of power, particularly power which has been associated with overwhelming success, held for a period of years and with minimal constraint on the leader.” He goes on to describe some of the syndrome’s clinical features: “manifest contempt for others, loss of contact with reality, restless or reckless actions, and displays of incompetence.”

So there you go. As far as I’m concerned, this is the best context in which to ponder the debate. Who the hell are we? This question matters far more than who “won” the debate or which way it pushed the poll numbers. Trump set the tone by making sure the debate was about nothing — that is, nothing except his greatness and incredible success, over and over, as the answer to every question and every challenge.

He was immune to anything remotely factual and felt no compulsion to act with decorum during the debate, turning it into an interruption-fest and essentially forcing Joe Biden to unleash his contempt back at Trump, at one point declaring: “It’s hard to get any word in with this clown.”

Biden also said: “You were the worst president America has ever had. Come on.” To which Trump replied: “I’ve done more in 47 months than you’ve done in 47 years.” It was these sorts of exchanges that began turning the debate into a barely watchable joke and, I fear, a naked exposé of the true state of the union.

We’re a hypermilitarized global absurdity. Indeed, Trump at one point brought up his creation of the space force — a new, science-fiction-esque military branch meant to give the United States dominance in outer space — as one example proving the accuracy of the statement he’d just made: “There’s never been a president who’s done more than I’ve done.”

It wasn’t like I’d expected much from this debate. But I did expect Trump’s narcissism to remain a little more quietly in the background, expressing itself not as raw reality but hiding behind right-wing platitudes. That’s what an American presidential debate is supposed to be. It’s what the media expect to cover and ultimately pronounce a winner and a loser, based on how skillfully the platitudes are articulated . . . and other factors, such as, for instance, Richard Nixon’s five o’clock shadow and sweaty forehead in that first debate with John F. Kennedy. Indeed, the era of televised presidential debates has seemingly amplified the significance of superficial factors in determining presidential fitness.

This, in the era of nuclear weapons! Not to mention climate change, along with the all the issues, such as racism, that have always been part of the nation’s social infrastructure. For 60 years now, we’ve been mixing those real issues in with such matters as a candidate’s clothing and other trivia.

This has cheapened and waylaid the national, or at least the presidential, discussion of our serious issues. As a nation, we should by now be addressing such matters as racist policing, but instead we’re still at the point where the racism itself — is it bad or is it OK? — is what we’re debating. Thus when Trump was challenged by moderator Chris Wallace — “What’s so radical about racial sensitivity training (for police)?” — he responded: “They were teaching people to hate our country, calling it a racist country.”

And, oh yeah: “All the violence is from the left wing, not the right wing. Somebody’s got to do something about antifa and the left.”

I repeat once more the name of the Atlantic article I quoted: “Power Causes Brain Damage.”