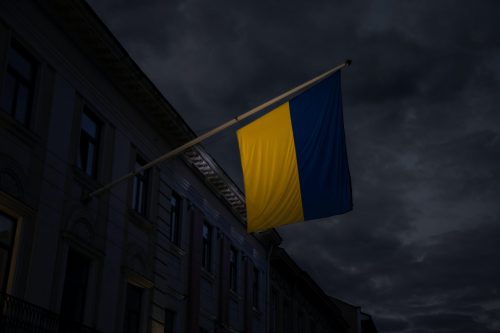 Ukraine’s President Zelensky had a fairly successful visit to Washington last month, returning home with promises of more American weapons and unqualified US backing for Ukraine’s war effort. Zelensky’s sales pitch, that the war is an investment rather than a charity, went over very well in Congress.

But questions remain, such as how long that investment will continue and when (if ever) will the war move into a negotiating phase. Zelensky no doubt is attuned to two slow-moving trends in American opinion that his country will have to confront sooner or later: one on the far right, which wants to substantially reduce aid to Ukraine, and on the left, which demands negotiations with Russia. Both those paths seem closed for the foreseeable future.

Zelensky’s own hopes, which may or may not have been a subject of discussion with President Biden, is for future protection from Russia, which includes Ukraine membership in NATO. He said several months ago: “De facto, we have already made our way to NATO. We have already proven our compatibility with alliance standards.”

He also said: “This is an alliance, de facto. Today, Ukraine is applying to make it de jure.” But he backed down later, acknowledging that his country needed to accept that it might never join NATO.

And with good reason: The very idea of Ukraine in NATO faces some unpleasant realities.

First, Ukraine does not have French, German, US, and probably other members’ support for membership.

Second, when Sweden and Finland decided to apply for membership earlier this year, they were immediately green-lighted to apply. Moscow considered that a provocation, but imagine how much more of a provocation Ukraine’s membership in NATO would be.

Third, and probably most important, the NATO treaty would require that all members contribute to driving Russia out of Ukraine—a full-scale US and European intervention that would mean war with Russia. Some experts now talk about a postwar security guarantee for Ukraine in lieu of a treaty, but that too would raise the risk of a wider war.

Even though Ukraine cannot join NATO, it makes a plausible argument that it is performing NATO’s mission: defeating Russian aggression. But that is an argument for prolonged war and no negotiations with Russia.

In Europe, opinion polls show only a slight erosion of public support for arming Ukraine. “A new survey by eupinions, a platform for European public opinion, found that 57 percent of Europeans, down from 60 percent in the summer and 64 percent in March, still support sending arms to Ukraine.”

Few Europeans seem to buy Putin’s arguments; even the new Italian right-wing leadership firmly supports Ukraine. Yet one can detect a slow erosion of support for Ukraine, and the longer the war goes on, the more will that erosion continue.

Is There a Negotiated Path to Peace?

Meanwhile, support in the UN for negotiating peace is far from firm. To be sure, in October 66 UN members voted in favor of a cease-fire and immediate talks between Ukraine and Russia.

However, no country offered a plan for implementing a cease-fire, which the UN secretary-general himself discounted as a prospect. Nor was any opinion offered about how to induce either Kyiv or Moscow to accept a cease-fire, or what its ground rules might be, for how long it would be in effect, and on what basis it might lead to negotiations.

Recently, Vladimir Putin again said he is interested in peace talks. But the Russians have created insuperable obstacles to peace by violating the UN Charter’s article 2 on the use of force against another state. (They are also accused of violating a UN sanction on Iran’s sale of drones that Russia is now using in the war).

Moreover, by occupying Ukrainian territory and declaring it their own, by intimating that use of nuclear weapons is conceivable, and by dramatically increasing the number of soldiers being sent to the front, the Russians also are in violation of the Charter’s Article 33, which calls for the peaceful resolution of disputes. Few of those 66 UN delegates recited the list of Russian violations of the Charter and international law, and some of them–specifically India–were outright hypocritical in saying that their country took no side other than the side of peace. Those observers who see India, or China, as a potential broker are whistling in the wind.

Peace Through War is Not the Way

A recent op-ed in the Washington Post gives insight to the mindset of the US foreign-policy elite. Former secretary of state Condoleezza Rice and former defense secretary Robert Gates propose that “the way to avoid confrontation with Russia in the future is to help Ukraine push back the invader now.”

Arguing that Putin’s ambitions for restoring the Russian empire will never be thwarted by negotiating peace, Rice and Gates call for more, “dramatically” more, weapons shipments to Ukraine. Ukraine, they acknowledge, is America’s and NATO’s proxy for defending the West.

Yet they also acknowledge the terrible destruction war has wreaked on Ukraine, making it totally dependent on outside aid. Their solution is frankly unconscionable: Let Ukraine’s people suffer even more so that the country can defeat Russia and reclaim all Ukrainian territory. Morally and logically, that is no solution at all.

Supporters of a negotiated peace in Ukraine need to do a much better job of promoting the idea. It is not enough to keep calling for peace when one of the warring parties is an aggressor state.

What would be the parameters of negotiations? How would a cease-fire preliminary to talks be supervised? And what are the substantive issues to negotiate given that neither the Russians nor the Ukrainians are willing to yield territory or accept arms control?

These are among the reasons I keep reminding people, unhappily, that not all wars end in peace settlements. Some wars are interminable, and only “end” when one party is exhausted or, hopefully for Russia, changes course when the regime changes.

That is not a near-term solution, but peace through war is worse still.