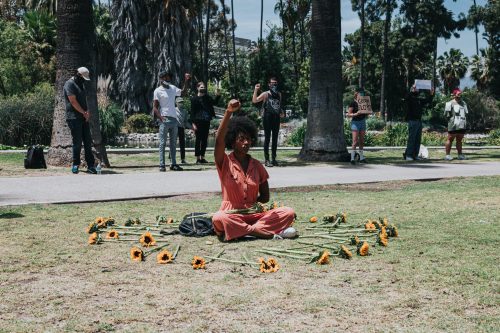 Looking at the most controversial social movements in the US over the past few years we might come to the conclusion that it’s really impossible to protest publicly without inviting violence, mayhem, rioting, street brawls, and zero meaningful progress. I mean, the uprising following the murder of George Floyd featured widespread vandalism, which is legitimately associated with violence by the public.

Result? Any temporary gains were rolled back and defeat snatched from the jaws of victory in city after city. Talk of “defund the police” morphed over a relatively short period into “more cops, bigger police budgets.”

A few short years before that, Trump hit the political scene and encouraged violence, bemoaning the good old days when pinko protesters could be beaten senseless and removed on gurneys. His followers emerged from the shadows, emboldened by his rage rhetoric, and have been an armed and dangerous public phenomenon ever since.

Many activists have become discouraged, feeling that civility is impossible, that change is only done with the “inside game” of voting, political office holding, campaigning for favorite candidates, and that’s about it. But the best social movement scientists and practitioners–the sorts of people who brought us civil rights, LGBTQ+ rights, disability rights, and environmental protection victories know that there are some primary ingredients in the secret sauce of grassroots victories.

·       Make the commitment to nonviolence front, center, overt, and part of every message.

·       Develop peace teams who know how to deëscalate your own people in particular, to avoid tarnishing the image of your campaign, your organization, your coalition, and your movement.

·       Train, train, train. Learn how to change the inner settings of your participants by both theoretical and simulated training until you develop cadres of disciplined nonviolent “combatants.”

·       Be creative, be intergenerational, and multicultural.

·       Develop dialog opportunities with opponents. This is not being “less radical,” this is helping effect real change, making connections that can blunt harm, and even help pave the way for minor and even some major loyalty shifts or security defections.

We can heal our streets enough to tamp down violence, protect all people, and accelerate the rate of positive change that we have seen over the decades. This is not to say it hasn’t continued in some instances, especially in the labor movements that have unionized workplaces and won higher wages when they are so desperately needed, but we can return to times when citizens felt much more positive and as if they might also join grassroots campaigns instead of hoping the armed agents of the state would stop the destruction in the streets.

America has a proud history of allowing for the agency of all, whether they are old enough to vote, whether they are asking for equal human rights or protection of our water, food, air, and health. We can find our way back to that peaceable contention of views and values if we wish.

Yes, it will take leadership. Who says you cannot be one? When a 12-year-old girl from Sweden helped start a massive youth movement raising climate emergency awareness in the US, who is eliminated from the pool of potential leaders in our grassroots efforts for a cleaner, more justice world?