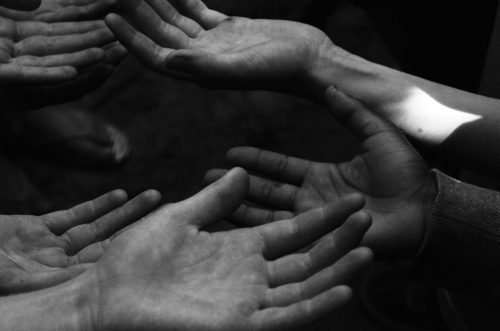 Praying we learn from each other

Praying we learn from each other

“How exactly is ‘diversity’ our ‘strength’?”

Oh, the smug ignorance of Tucker Carlson! Sometimes, in his certainty of rectitude, he asks questions that actually matter — or would matter if they were asked with any sort of honesty. The above quote, blathered on his news show, recently started flickering again in my brain, when I read about a Florida teacher who was fired after sarcastically interrupting the prayer session of some Muslim students at their school, declaring (as per a Tik Tok video): “I believe in Jesus, so I’m interrupting the floor.”

Uh, how exactly is diversity our strength? Or is it just an infuriating nuisance?

In Tucker World, diversity is a “strength” because it gives the true believers (you know, “us”) an endless supply of enemies — and having an enemy is an extremely useful uniting force. And in unity there is strength. Question answered.

But there is a much larger answer as well — a “trans-political” answer, you might say. Which is to say, it’s not simple. The true believers who hate diversity do so because it’s an inconvenience, interrupting their certainty that what they believe, religiously, socially or politically, is The Truth (the whole truth, and nothing but). If that’s the lie you’re stuck in, then of course diversity is infuriating; it’s forced tolerance, a.k.a., political correctness. Save us, Tucker!

And the problem here, from the so-called liberal perspective, is that diversity — you know, the celebration of differentness — is the whole deal. Pluralism is good. And it’s the law. In other words, we should relax and be proud that different points of view exist in the social structure. End of discussion. It’s kind of like walking through a museum and looking at various cultural artifacts in glass cases.

The extraordinary musical satirist Tom Lehrer nailed the inadequacy of this thinking back in the ’60s in many of his songs. The one that comes to mind in this moment is “National Brotherhood Week”: “. . . Stand up and shake the hand of someone you can’t stand. You can tolerate him if you try. . . . Be nice to people who are inferior to you. It’s only for a week so have no fear. Be grateful that it doesn’t last all year.”

You know. Differences are impenetrable. Just get used to it.

Here’s where I . . . uh, beg to differ. Returning to the Muslim students whose prayer was interrupted — OK, I agree that Islamophobia should not be tolerated and, with a video of the incident going viral on social media, firing the teacher may have been the only recourse. But that hardly “fixes” things. The utterly crucial matter here, from my point of view, is that: A. Everyone is different from everyone else; and at the same time, we all have an enormous amount in common, regardless of our differences. And B. These differences are not impenetrable. We can learn from one another. We can share being alive!

Religions, for instance, are more than just rituals and platitudes — solid certainties, to be swallowed whole or contemptuously rejected. Considering that the religious conflict in question happened at an educational institution, what if . . .

. . . this were seen as a learning opportunity?

I immediately shrug my shoulders. In no way do I mean this in a simplistic sense. All I’m saying is that life itself is an endless learning opportunity. And learning should never stop. And education isn’t just a firehose-flow of facts, blasted at the students. Learning is an individual process, and people learn in different ways. Also — I say this as a former writing teacher, at every level from elementary school to college — learning flows in all directions. If the teacher isn’t learning from the students, the students probably aren’t learning much from the teacher.

And learning isn’t simply an accumulation of data. Learning means merging: merging what I already know with something, hmmm . . . something that suddenly makes sense to me. Learning means continually rethinking my life. And part of education is the ability to celebrate not knowing. The fact that there is a limit to our knowledge never goes away. I suggest we always remain aware of that edge in our lives. There’s no need to fear it. This is where new ideas, new possibilities, enter our being. This is how we evolve.

What if that was the spirit in which the teacher had stepped, surprisingly, into the room (apparently her own office area) where Muslim students were praying? It might have seemed like a sudden, educational moment — even if it was also a shock and an inconvenience. Could some sharing have occurred? This is who I am. This is who you are. Sharing begins with respect for the others.

What if I stepped into my own office and there was Tucker Carlson, praying? What would I have done? I don’t know, but I hope I would have been attuned to my better instincts. You never know from whom you will learn.

Note: Learning doesn’t mean swallowing what the teacher says. It means absorbing what you encounter and letting it enter your thought structure, your emotional structure. Learning may well happen slowly. And also, guess what? It’s happening all the time, whether we know it or not. We all know a lot more than we think we do. And we are capable of surprising ourselves.

Indeed, that’s the essence of how I have taught writing over the years, which I learned from my mentor, Ken Macrorie. Via the process of “free writing” — write without stopping for a set amount of time . . . ten minutes maybe, or two hours — I tell my students: You have a voice. You are not a spectator. Learning means reaching within your own soul, pulling up what you find. We can’t learn from others without also learning from ourselves.