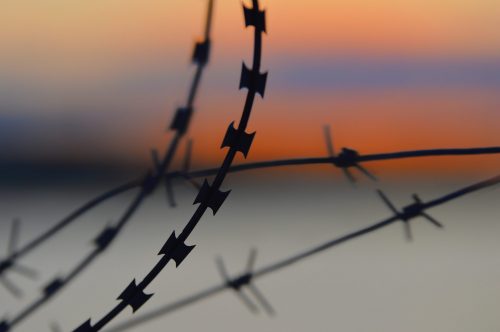 Beyond razor wire: A connected planet

Beyond razor wire: A connected planet

“Ducey insists Arizona holds sole or shared jurisdiction over the 60-foot strip the containers rest on and has a constitutional right to protect residents from ‘imminent danger of criminal and humanitarian crises.’”

OK, he’s a politician — Doug Ducey, the exiting governor of Arizona, who recently began erecting “hundreds of double-stacked shipping containers topped by razor wire” along Arizona’s eastern border with Mexico, including through the Coronado National Forest. Is this not his right: to blather, lie and give his constituents an enemy? And what keeps us safer from that enemy than a wall, especially one topped with razor wire?

No matter the wall doesn’t really keep desperate, fleeing migrants out. It keeps out ocelots and jaguars, bighorn sheep and spotted owls. It keeps out, or rather, imperils the life of the western yellow-billed cuckoo. It endangers the survival of 70+ plant and animal species. The wall is a monument to racism, according to Daniel Lombroso, director of “American Scar,” and what it accomplishes is ecocide.

“The crisis at the border is our government.”

The title of the film is not metaphorical. It refers to the fact that mountaintops were blown off to build the wall. The “scar” is the slash blown and bulldozed through mountain ranges in order to build the preposterous and cruel wall. Someday the wall will come down, but its “mark will last forever,” all for the purpose of turning an abstract concept — national territory — into something allegedly “real.”

Hurray for nationalism! Its essence is to divide “us” from “them.” We could not have nations on Planet Earth unless we believed the planet was full of people who are not us and who can thus be dehumanized, not only when we’re waging war but whenever we want. The existence of “them” is at the core of the national psyche — people who do not belong here and whose lives don’t matter. Racial and ethnic differences help maintain the illusion, especially the latter part of it: that their lives don’t matter.

And the reason it’s so crucial to believe this is that the world is far from perfect. People migrate for many reasons, often with utter desperation: their homeland being is ravaged by war, authoritarianism, poverty, starvation, all of which is now intensified by the presence of climate change, especially in the Global South. Indeed, more migrants than ever are attempting to cross the U.S. southern border.

I want to live in a country — in a world — that sees beyond razor wire as the answer, indeed, that embraces understanding and connection as the only way forward. Oh God. We know this. Why is it so politically marginalized?

Consider Humane Borders, a nonprofit organization founded in 2000 for the purpose of helping migrants survive the treacherous trek to the border, primarily by establishing water stations in the Sonoran Desert, motivated by “a universal need for kindness.” Their primary mission “is to save desperate people from a horrible death by dehydration and exposure.”

But in doing so they have also taken on the terrible task of finding — and identifying — the bodies of those who do not survive. Many remain unidentified. And of course many victims are never found; they simply vanish under the desert sun.

As we look beyond our fear of “them,” as we look at the world with clarity and directness, it becomes clear that we must address its difficulties with more than kindness. Climate change is consuming the planet! It endangers every last one of us, and all of us — but especially the richest of us (who are, ironically, the ones least affected by climate change right now) — bear responsibility for it. Attention, ex-Gov. Ducey: Climate change does not recognize national borders.

Are there role models out there — role models for humanity’s evolution? Maybe so. Let us cross the ocean and visit the continent of Africa, where climate change is demanding human sanity, both nationally and trans-nationally, to restore diversity in the continent’s ecosystems. Welcome to the Great Green Wall, described as “the first wall designed to bring people together rather than keep them apart.”

The Great Green Wall, envisioned and financed by some 20 international organizations, including the African Union, the World Bank and the U.N., is a “wall” of biodiversity that is nine miles wide and 4,831 miles long, running across the Sahel region of Northern Africa, just south of the Sahara Desert. It runs across 11 countries — Djibouti, Eritrea, Ethiopia, Sudan, Chad, Niger, Nigeria, Mali, Burkina Faso, Mauritania and Senegal — who “have joined to combat land degradation and restore native plant life to the landscape,” according to National Geographic.

The Great Green Wall is a wall of native trees and plants — millions of them — planted by hundreds of thousands of local residents. And the leaders of these 11 countries are working together to deal with land degradation.

“Beyond the project’s strong political foundation, its carefully crafted approach brings environmental benefits both locally and globally. The initiative uses an ‘integrated landscape approach’ that allows each country to address land degradation, climate change adaptation and mitigation, biodiversity, and forestry within its local context.”

And the benefits are both local and global — a concept apparently not yet understood by leaders in the Global North.