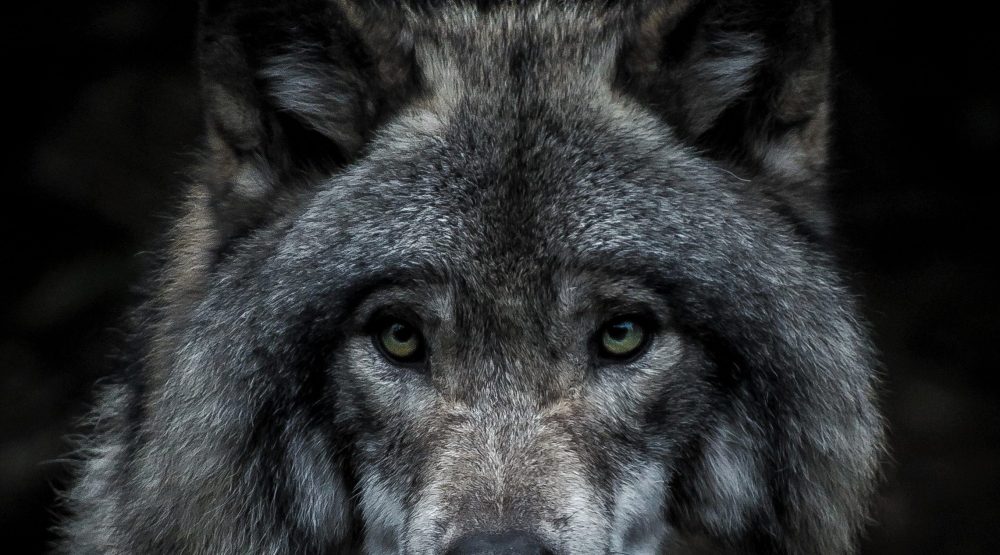 Staring into the eyes of the wolf

Staring into the eyes of the wolf

Close your eyes and try to envision the two wolves.

Imagine yourself as a terrified child. I think that helps bring the myth to life . . . this myth, said to be Cherokee, of humanity’s two choices. The wolves are engaged in a vicious fight.

The wise grandfather explains to the child that the two wolves are inside all of us. One of the wolves is an arrogant narcissist — a jerk, an egocentric idiot. You know, evil. The other is the embodiment of joy and empathy, kindness and love.

The trembling child asks in alarm: “Which one wins?”

And Grandfather lays it on the line: “The one you feed.”

This is morality 1.0. Don’t cater to the worst in yourself. Yeah, OK, that makes a lot of sense; we all no doubt need to remind ourselves of this on a regular basis, especially when things aren’t going the way we want.

But here’s the problem with this myth — or at least what seems to be its oversimplified version. It’s continually vulnerable to turning into a tool of the worst of who we are. I make this point in the midst of a larger research project: trying to understand the nature of war and the nature of being human. Are they inseparable? And more to the point: How do we evolve beyond war? When the two wolves popped up in the midst of this research, it felt like an “aha!” moment. Which wolf wins? The one you feed:

So wrote Kenny Stancil in Common Dreams. Yeah, the U.S. military budget just keeps growing. So does the global military budget. And here’s what this feeding frenzy looks like less abstractly, in the present moment, in the words of Marcy Winograd of Progressive Democrats of America:

“The Department of Defense recently announced it would send nearly $3 billion more in weapons and assistance to Ukraine. . .  the largest Ukraine arms package yet — rockets, drones, 350,000 rounds of ammunition . . . . The latest announcement from the DOD brings the total in weapons, ammunition and military training to escalate the war in Ukraine to at least $13.5 billion.”

But as I think about this, a counter-argument, a defense of U.S. military assistance to Ukraine, immediately pops up. The U.S. and NATO have no choice! Putin’s the bad wolf here. And this is where the wise grandfather and the myth itself begin to collapse. Both wolves are fighting with bared claws and bared teeth; both are trying to kill the other. Humanity’s wars over the last 10,000 years have evolved, it would seem, out of that very myth. As the human social structure has gotten more complex, more grounded in property and wealth — and control — the concept of us-vs.-them has hardened into place. There’s always an enemy, and the enemy is always the bad wolf.

War took a while to find itself. As anthropologist R. Brian Ferguson wrote in Scientific American:

“Simple hunting and gathering characterized human societies during most of humanity’s existence dating back more than 200,000 years. Broadly, these groups cooperate with one another and live in small, mobile, egalitarian bands, exploiting large areas with low population density and few possessions.”

But life slowly grew more complex for much of humanity, especially as people transitioned from hunter-gathering to agriculture and the establishment of fixed settlements, property, ownership and, ultimately, wealth (or lack thereof).

“preconditions of war became more common in more places. Once established, war has a tendency to spread, with violent peoples replacing less violent ones. States evolved around the world, and states are capable of militarizing peoples on their peripheries and trade routes.”

And this is today’s world. Are we stuck with war then — war that has evolved its weapons over the years from clubs to spears to guns . . . to nuclear weapons? We’ve pushed ourselves to the absolute brink of existence, with minimal interest at the highest levels of state power to transcend self-annihilation, either by war or my climate collapse. When the mega-bombs begin to burst, billions of us will soon be dead. We’re stuck — is that it? So long, humanity?

Ferguson does point out that some human societies, during that era of agricultural transition, avoided the emergence of war. “Many social arrangements,” he points out:

“impede war, such as cross-group ties of kinship and marriage; cooperation in hunting, agriculture or food sharing; flexibility in social arrangements that allow individuals to move to other groups; norms that value peace and stigmatize killing; and recognized means for conflict resolution.”

Conflict is inevitable — that will never change. But various societies over the millennia have found ways not simply to minimize conflict, but to learn from it and transcend it, to create what Ferguson calls “distinct preconditions for peace.”

This is not idealism! It only seems that way to minds encaged in the belief that they’re the good wolves. Creating the preconditions of peace — negotiating with Russia, for God’s sake, and beyond that, disarming the world’s nuclear weapons, courageously addressing climate collapse — is not wishful thinking. It’s evolution.