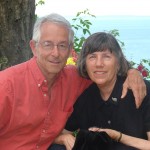 “As loving parents who raised two children during the era of the Vietnam War, we were inspired by the work of child psychologist Haim Ginott who observed: “Misbehavior and punishment are not opposites that cancel each other. On the contrary, they breed and reinforce each other.”

We asked ourselves: Is it possible that spanking – smacking, some say – has a ripple effect into our community and inter-nationally? And so we challenged two rarely questioned, often-implemented axioms of our times:

Violence is a good way to get what you want.
You can end violence with violence.”

As loving parents who raised two children during the era of the Vietnam War, we were inspired by the work of child psychologist Haim Ginott who observed: “Misbehavior and punishment are not opposites that cancel each other. On the contrary, they breed and reinforce each other.”

We asked ourselves: Is it possible that spanking – smacking, some say – has a ripple effect into our community and inter-nationally? And so we challenged two rarely questioned, often-implemented axioms of our times:

Violence is a good way to get what you want.
You can end violence with violence.

Surprisingly, both behaviors remain popular in our culture. A recent ABC News poll suggests that half of American parents still spank their children. Political policy makers are leading the charge, despite a growing mountain of proof that these ideas are obsolete — still used, but replaced by better ways.

We were so impressed by Haim Ginott’s work and a growing body of supporting research that in disciplining our daughter and son we challenged ourselves to rule out spanking. Pre-deciding “no” to physical punishment threw us into sometimes feverish searching for alternatives to improve behavior and keep our daughter and son safe. Doubtful at first, we kept discovering creative, nonviolent alternatives that worked and kept us and our kids together and (mostly) behaving our best. We soon realized that rejecting violence was possible, do-able in real life, and desirable.

Pre-deciding about violence, beginning at home and then rippling out globally, is the most urgent need of our time. It is our best hope in this era of widespread atomic, biological, and chemical weapons when even a few people can do a lot of harm. Whether with physical punishment or all-out war, the stunning paradox of our time is that rejecting violence and dignifying our adversary – not humiliating, harming, or excluding – is the response that gets the best results.

What does smacking your child have in common with the fast-spreading violence we read about in headlines from every continent like terrorist attacks in Paris, Beirut, and Jerusalem, and drone strikes that kill innocent women and children?

They all are part of the cycle of cruelty. Yet as today’s headlines clarify for us, violence primarily fuels more flames of hostility.

Take the case of the war on terrorism. One pilot who directed drone strike assassinations of terrorist leaders – which often kill innocent woman and children – admitted: “We kill four and create 10 [new terrorists].”

Whose idea was it that the best way to fight terrorism is to create more terrorists? And how have they been so successful at selling this idea?
The mathematics of violence is simple: The cycle grows exponentially, like pouring gasoline on a fire. The more violence you dish out, the more you get back.

If this is true on the battlefield, how true is it in neighborhoods and homes?

Interestingly, Mahatma Gandhi said that subtle forms of violence are actually the most dangerous, because they are unquestioned by society, everywhere on Earth, and never ending.

Research clarifies that parental use of physical punishment is often copied from the authorities who raised us. By imitation, we learn violence from childhood.

Today child, spouse, neighbor, and “other” abuse – sometimes justified as retaliation or self-defense – dominates the evening news. Smacking-to-teach may be justified, yet few parents deny having hit harder than intended out of rage or fear. More abusive treatment easily follows. Now realizing this at-home cause-and-effect makes seemingly small family choices about punishment matter a lot more for humankind’s future together. In today’s violent world, we parents matter more than ever.

Dr. Ginott reminds us that it is neither passivity nor punishment, but mutual empathy that is the foundation of effective parenting and family health. Pre-deciding to master listening and become an artisan of communication best helps parents relate to their children in an understanding way that improves behavior and dignifies everyone without diminishing parental authority.

That’s why it is always the right time to reject corporal punishment. Discipline without hitting is easier for both parent and child, especially if hitting was never used earlier or at all. This practice makes better communicators of the whole family, and parents become better teachers for their children by responding creatively – and nonviolently – to their own anger and fear.

What is true on the micro-level of the family unit is equally as true on the macro-level of international relations. To prevent war, one must pre-decide. In the midst of the blazing fire, it is too late to get the oily rags out of the garage. Amid chaos and anxiety about real or imagined threats, it is too late to decide against the primitive, violent act of war. In fear, our brains do not even work correctly, save to rationalize old thinking and cruel acts that destroy life and relationships. The creative possibility is not available – eclipsed by our visceral, reptilian reactions.

Gergana Sabeva Yordanova’s extraordinary doctoral research, Effects of the Pre-Decision Stage of Decision Making on the Self-Regulation of Behavior, affirms the importance of pre-decision in our lives. Without it, a lack of self-regulation gives way to virtually every problem of our society – emotions and impulses that lead to money mismanagement, compulsive eating, greed, alcohol and drug addiction, abusive behavior, and ceaseless violence.

Our thirty-five years of facilitating serious adversaries internationally in a healing and peacebuilding process continues to strongly validate how a new path toward reconciliation works with very diverse people who pre-choose to decline aggression in favor of sitting down face-to-face. The new experience of listening-to-learn and being heard – we call it Authentic Dialogue – allows antagonists around the world to experience this dependable and transformative truth: “An enemy is one whose story we have not heard.”

As with our children and Dr. Ginott’s prescription of empathic communication, the pre-intention to engage in Authentic Dialogue enables so-called enemies to feel less isolated, hopeless, or desperate. Rather than being swept downstream in a flood of violence and bloodshed, they discover that they have more eloquent options.

This is the face-to-face entry point to life beyond war. We’ve experienced it facilitating and mentoring citizen-driven engagement for Soviets and Americans, Palestinians and Israelis, Armenians and Azerbaijanis, and most recently Muslims and Christians in Nigeria, adversaries in the Democratic Republic of Congo, and once-warring tribes in Cote d’Ivoire. Authentic Dialogue – the technique of listening-to-learn and being heard – time and again delivers seemingly miraculous results.

The daily brutality in the news headlines is proof: We are pushing the violence button too quickly and too often. The evidence favors that we choose “communicating with” not “battling against.” Pre-choosing Authentic Dialogue has served our parenting and enabled many sworn adversaries we’ve watched create their new life together – beyond war.

McLeod’s prescription may be the urgently needed preventive and cure, not only at home but among nations: “The pre-decision… gives you a tool for making decisions as your best self, so when the worst day happens you’ve already decided how you want to react.”

Being one’s best self at home and also among nations often works a small miracle. And sometimes a great one.
_____________
Elizabeth “Libby” Traubman is a retired clinical social worker and co-founder of the 23-year-old Jewish-Palestinian Living Room Dialogue. Lionel “Len” Traubman retired after 38 years from his San Francisco practice of pediatric dentistry. The Traubmans have co-produced five documentary films of traditional adversaries reconciling. Married 48 years, they reside in San Mateo, CA, and continue nurturing two children, three grandchildren, and relationship-builders internationally.