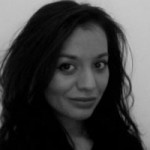 “The latest breakdown in Palestinian–Israeli negotiations and resumed armed conflict between Israel and Hamas in Gaza mark an opportune time to recognize and encourage women’s contributions to peace. Setting a stunning example, Palestinian and Israeli women from Creativity for Peace have taken the initiative to move forward in peace dialogues while their elected representatives have failed to broker an agreement.”

The latest breakdown in Palestinian–Israeli negotiations and resumed armed conflict between Israel and Hamas in Gaza mark an opportune time to recognize and encourage women’s contributions to peace. Setting a stunning example, Palestinian and Israeli women from Creativity for Peace have taken the initiative to move forward in peace dialogues while their elected representatives have failed to broker an agreement.

Creativity for Peace is a unique grassroots organization that empowers young Palestinian and Israeli women with tools for community-based peace and reconciliation intervention programs. At a time when hostilities have escalated to some of the worst in recent memory, with women and children bearing the brunt of the devastating consequences of the conflict, the work of Creativity for Peace, and other peacebuilding organizations, must be supported and pushed forward.

A three-week summer camp near Santa Fe, New Mexico initiates participants into the Creativity for Peace program, facilitates interaction between the two groups and teaches them compassionate dialogue, reconciliation processes and the skills to encourage social inclusion for women in their communities.

Since 2003, 207 young women have participated in Creativity for Peace programs. These emerging “Young Leaders” are actively engaged in presentations, public speaking engagements and meetings with organizers in various communities, schools and international conferences. The work of Creativity for Peace and these Young Leaders demonstrates that the participation of women as valuable stakeholders in their communities can and should be recognized and encouraged.

Women involved in these programs confront the asymmetrical power dynamics that have formed from historical and socio-political imbalance. For Palestinian women, the national liberation movement is part of their empowerment in daily life, whereas Israel’s institutionalized nationalism underscores their reality of security.

Both the liberation movement and Israel’s nationalism have been influenced by opposing popular identities, and women often come to Creativity for Peace with preconceived notions of occupied-occupier positions. By encountering each other’s personal experiences, fears, animosity and struggles, they gradually deconstruct the artificial barriers built on the very stereotypes that keep them apart. Nahida, a Palestinian member of Creativity for Peace since 2008, recalls her transformation: “My thoughts changed, the way I see people has changed, how I see other people – I became a new person. A part of me was touched that had never been touched before. I was full of anger, hatred, thoughts of rage. I feel much stronger, even with the new challenges.”

Transparency is crucial for this to work, and by effectively providing a safe haven for these young women to express themselves, Creativity for Peace facilitates a psychosocial switch that helps lay the foundation for trust between women of these divided communities and encourages greater efforts towards reconciliation.

Additionally, these women help expose the gendered dimensions of conflict. Their participation in conflict transformation means the issue of gender equality and women’s perspectives and experiences are incorporated into conciliation strategies between their communities.

The women of Creativity for Peace are also working toward opening up official political negotiations in the region that can rectify long-standing asymmetries and address all aspects of reconciliation. For example, Creativity for Peace is paving the way for more meaningful implementation of Resolution 1325, which has been approved by both the Palestinian Authority and the Israel Knesset, that calls for the inclusion of women in official Palestinian-Israeli peace talks. Women have unique insights when included in negotiations, often raising key issues that would otherwise be ignored by male negotiators, particularly human rights issues such as the status of women during and after conflict. On this inclusion in negotiations, former US Secretary of State Hillary Clinton stated: “So-called women’s issues are stability issues, security issues, equity issues.”

Creativity for Peace and its women leaders are re-envisioning the nature of peace talks to ensure their transformative effects for all of society. Women peacebuilders on both sides of the conflict are crucial assets in this struggle to bring peace and stability to both nations, and these women and organizations such as Creativity for Peace should have our full support and attention.
~~~~~~~~~~~~
Vanessa Thevathasan, syndicated by PeaceVoice, is a researcher and writer for International Women’s Initiative and the Centre for Armed Violence Reduction. This article originally appeared at Insight on Conflict.