Anticipating Sirens and Contractions: Bringing a Baby Into This Reality 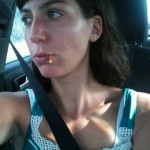 “Thursday was my “due date.” I began my 40th week of pregnancy yesterday and am due to go into labor any day now. I’ve been mentally and physically preparing myself for this exciting and unpredictable moment for months, planning to have as natural, active and positive an experience as I can without any unnecessary interventions.”

For the full article:
Anticipating Sirens and Contractions: Bringing a Baby Into This Reality
977 Words
By Mairav Zonszein

Thursday was my “due date.” I began my 40th week of pregnancy yesterday and am due to go into labor any day now. I’ve been mentally and physically preparing myself for this exciting and unpredictable moment for months, planning to have as natural, active and positive an experience as I can without any unnecessary interventions.

Then came the huge intervention of reality this week as rockets began being fired at Jaffa-Tel Aviv. No longer simply anticipating contractions, but anticipating sirens. No longer just being attentive to my body ahead of labor, but also ahead of rockets. I’ve been coming to terms with the fact that I’ll be bringing my first child into this world amid the harrowing sounds of sirens followed by booms of rockets exploding in the skies above me that shake the whole house — and waking up every morning to news that the Israeli military is indistinctively killing dozens of Palestinians, including women and children, in an operation that I do not feel protects me or serves the interests of my soon-to-be-born child’s future.

At first I couldn’t see past my upset and resentment that the holistic, wholesome and calm labor experience I had been hoping for is being taken away from me, just like that, because of the inopportune timing, and there’s little I can do about it. And I’m angry over the fact that my child’s first days of existence will be shrouded in unnerving sounds and an atmosphere of fear, violence, death and destruction.

And this, on the already grim backdrop of weeks of heightened violence in which so many young people — the three murdered Israeli teens and significantly more Palestinian teens — have been killed, beaten and detained. Remember Nadim Nuwara and Mohammed Salameh who were shot by Israeli forces in Beitunia on May 15, 2014, while posing no direct threat? Still no condemnation or legal action has been taken. And all of this on top of the ongoing daily reality of the evergreen occupation and general violence of life here in Israel and Palestine.

While it is still of course difficult and stressful for me as far as my personal experience as a pregnant woman, relatively speaking, I’m fine. My life here in Jaffa goes on. And I can’t help but think about all the pregnant women in the south of Israel, not to mention those in Gaza, who are going into labor these days. What about them? They don’t have sirens to warn them or well-equipped hospitals or anywhere else to go. Where do they find comfort? How can they possibly give birth in such a situation? Their daily lives, already trying on many levels, cannot simply go on when tons of explosives are being dropped from the sky all day and all night. A woman’s body cannot easily go into labor when she is feeling extreme anxiety or fear – whether from the labor itself or other issues – and certainly all the more so during a state of armed conflict.

But here in Tel Aviv-Jaffa, the routine doesn’t seem to have been affected much, thanks entirely to the fact that not a single rocket has actually made landfall. As Uri Misgav writes in Haaretz (Hebrew), the Iron Dome, which has thus far intercepted all the rockets over the greater Tel Aviv area and reportedly has a 90 percent success rate, allows Israelis the dangerous duality of what he describes as a maximum sense of victimhood with minimum obstruction of their daily comforts. “They can be glued like drug addicts to the radio and TV while absolving themselves of any self-examination or criticism of the endless cycle of hate and violence.” (My rough translation.)

Indeed, it is quite astonishing that somehow life does simply go on here, despite the emotional distress. Israelis continue to act as if they are shocked that we are being attacked, and that they are the only victims – or at least the only righteous ones. The fact is, as awful and difficult as it is to live under the threat of rockets, nothing seems to be able to shake up Israelis and shift their perception of the reality here and how to better the future for all those who live in this region. The nearly half-century long occupation hasn’t done it. The killing, arresting and beating of Palestinians with impunity has not done it. The constancy of settler violence hasn’t done it. The burning alive of a child and brutal beating of his cousin hasn’t done it. The killing of so many Palestinian civilians at a time when rockets are being fired at us is certainly not going to do it either.

So what will? As a soon-to-be-mother, the sense is even more acute for me now that as upset as I am that I will be bringing a child into such a harsh reality, I am even more disturbed by the fact that Israelis think they can continue with these policies, actions and complacency and think they won’t have to pay a price for it, that our children won’t all pay a price for it at some point if we are not able to see past our own isolated situation and farther than just tomorrow.

Regardless of what the other side does and how awful the Hamas regime may be, I don’t see how killing nearly 100 people in four days will serve me and my family’s interests. As if all the rockets can be wiped out? As if wiping out all the Hamas people will bring quiet? As if military might can ever really bring about a long-term solution?

Nothing about life here is “normal.” How could it be? And neither will be my birthing experience – and maybe that’s for the best, so that things have a chance to actually change. But I refuse to be driven by fear – whether it is sirens or contractions.