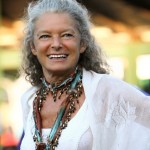 “Will we dig up paradise to be able to try to tweet a picture of paradise? To tweet or not to tweet, that is the question of our time.”

For the full article:
Rare Earth Paradise
952 Words
By Sandy Lyon
Will we dig up paradise to be able to try to tweet a picture of paradise? To tweet or not to tweet, that is the question of our time.

So all those little pieces that make up your electronic do-dads, iPhones, Smartphones, Awesome Blackberries and computers and such. All those little pieces need something called “rare earth minerals”. Why? I’m not sure, but they need them to work. Without them there’s no tweeting amazing mountain pictures, or sunsets or your friend sticking out her tongue. No selfies from high atop Mt. Everest. No email, no instant messages, without rare earth minerals. What’s a gal to do?!

These so called rare earth minerals are apparently not too rare. They’re pretty much scattered around in places on the earth that are either hard to get to or under some beautiful mountain range or forest.

So what I’m wondering is; will people mourn the loss of tweeting more than the loss of the mountain that made that tweeted picture of a mountain possible, or, will people of the future mourn the loss of the mountains and wonder what tweeting was, as some other technology replaces yet another. The rare earth part of rare earth minerals must mean that the earth, as it is, will be rare in the future if we keep staring at our iPhones trying to be smart as we do something really, really stupid. Tearing apart the earth so we can create technologies and things that will quickly become garbage that expands the plastic island in the Pacific Ocean, which is now bigger than the state of Texas and rapidly growing, as the natural earth in its fertile form shrink-wrapped within a poisonous layer of plastic and waste. Rare Earth indeed.

I have a growing gray spot in the center of this grandmother’s heart as I view into the future and see Sophia and Hayden and Daniel facing the results of these choices. I would put down all electronic toys and technical trinkets if it could change their world, but I’m saddened to know that many would not and will not see that it is our gift to the future to use less. Yes, Use Less. Create less garbage for the oceans to drown in. Resist the urge to tweet needlessly. Resist the urge to buy more stuff. Maybe, if each time we are tempted by a new this or a new that, that we see it as bits of plastic and pieces of junk floating in the ocean. Not our ocean, but their ocean. And maybe if compassion be our friend, then put the piece down and take a deep breath for the future and count to ten or seven, generations, as the Native Americans philosophy is.

For this earth, this place that we call home is in fact very rare and it is up to us to keep that rare gift for those who will need a good earth in the future, the near and dear future. Those grandchildren, whose names we know, will inherit our choices, good, or bad, for we have borrowed their future to support our present. Not you, not me, but the so called industrial captains of the ship of destruction/pollution are the ones driving this earth into becoming so rare that this story may end up with our own extinction. As a species. It has, in fact, happened before to other large apes whose time ended. That is not exactly the kind of worldview vision we want to pass on to our child and theirs. No, we are merely the “consumers” in the game they are playing out in the mountaintops they remove and in the halls of democracy they assault with money gifts and power toys.

Our rare earth is being eaten by their desire for power and gain. Our role is just to be the ones to buy the stuff that turns into junk. Maybe it is time we starve that beast. Maybe by simply not purchasing the latest this or that we can slow the process of human’s extinction so that maybe, just maybe, our grandchildren, our species and maybe some other species can live through this current consumer madness, just slightly before we let the captains cause us to consume our own future.

Use Less is not a useless idea. It is an idea whose time has not only come, but will be a life saver. Use Less. A “consumers’ fast” to save the rare earth for the long run.

The ocean’s plankton provide half the oxygen the earth needs to support the life that currently lives, in ocean tides or on land. The other half comes mostly from forests. Forests, like the Amazon, that are being cut and burned by the captains to provide more stuff to fill the oceans with plastic islands.

When the earth, around three billion years ago, started to have the proper conditions for oxygen to enter our planet’s atmosphere, then the earth began to have the proper conditions for life, the kind of life that supports humans and fish and elephants and plankton and forests. Without the proper levels of oxygen that life can disappear, regardless of class, income, political party, sexual orientation, political system, religion, race or species.

Life that relies on oxygen will be altered by changes in the levels of oxygen on earth. On this round ball we all live on. It is already beginning to happen. Fox News will not report on it, so other methods of fact finding will be necessary. Google it now, before we run out of rare earth minerals, or our rare earth.
Our actions of consumption are choking our grandchildren’s air supply. It’s that real. It’s that serious.

Stem the tide, use less.
~~~~~~~~~~~~~~~~~~~~~~~~~
Sandy Lyon is a baker and butterfly curator gardener who writes for PeaceVoice and fights for Native and Earth rights in the far north of Wisconsin.