“Finally, the Pentagon is getting a bit realistic about Syria and possible US intervention, with a report of options laid out by letter from the chairman of the Joint Chiefs of Staff, Gen. Martin E. Dempsey, to Carl Levin of the Senate Armed Forces Committee, and the Chiefs warn about expense, loss, and blowback.”

For the full article:
Getting Syria-s
692 Words
By Tom H. Hastings

Finally, the Pentagon is getting a bit realistic about Syria and possible US intervention, with a report of options laid out by letter from the chairman of the Joint Chiefs of Staff, Gen. Martin E. Dempsey, to Carl Levin of the Senate Armed Forces Committee, and the Chiefs warn about expense, loss, and blowback.

The Cold War was a time of proxy wars, showcasing the relative strengths and weaknesses of the arms produced by the two superpowers, fought in other people’s countries. Indeed, except for Hungary in 1956, no war was fought on the soil of white people the whole time, an indication of the deep cynicism of both sides. The US always had better big weapons and the Soviets had the daily weapon of choice, the AK-47. Soviet tanks were only good for rolling over friendlies in the Warsaw Pact and their nukes were big and dumb, but their AKs were the gold standard for violent insurgency.

Most of the world is less excited about being crash test dummies for the US and Russia nowadays, although Syria seems to be an exception. Basher al-Assad spends his entire allowance every week on new shipments of Russian warmaking gear to use against his own people. The rebels get their gear mostly from the US through Qatar and Saudi Arabia, often also via Turkey. Both sides fight dirty, ignore international rules of warfare, and yet the kneejerk reaction of many hawks in the US is to ship weapons to anyone fighting the Russian weapon-wielders. Just because the US-backed mujahedeen in Afghanistan used their leftover weapons given to them originally to fight the Soviets against the US later–hence the term blowback–let’s forget that ever happened and give more guns and rockets and ammunition to insurgents who behead, execute, blow up civilian markets, torture, and in the most ghastly extreme case, a Syrian rebel leader is shown carving the heart out a government soldier and eating it. Those are the fighters Republicans in Congress want to support and many Democrats actually join this bloodthirsty insanity.

But even though Congress–and apparently President Obama to some degree–have mostly forgotten those lessons, some in the Pentagon seem to suddenly remember, especially as they see the sequester shine a more realistic light on the formerly illimitable funding picture.

The usual kneejerk kill-em-all-let-God-sort-em-out are attacking Dempsey. Will someone tell John McCain that if he keeps up with that apoplectic visage, one of these days it’s going to become his permanent look–oops! Too late. 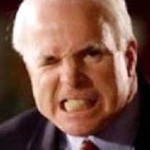 The sad truth is that the nonviolent revolution was stolen from the Syrian people, who started their Arab Spring just as nonviolently as did Egyptians, and very soon after. When the US intervened in Libya, that made the violent ones in Syria assume they’d get US military help too, so they picked up arms. The nonviolent revolution was overwhelmed and defeated in no small measure by this Libya Effect, and that is indeed an Obama decision that resulted in lots of gratitude from Libyans (you could tell by the way they assassinated our ambassador) and also set total fear in Assad’s heart and made him image Qaddaffi, bin Laden and Saddam Hussein. That made him totally commit to clinging to power by all means, including the ones that he uses so devastatingly on his own people.

Sun Tzu said build a golden bridge over which your enemy can retreat. That golden bridge is built by nonviolence plus negotiation, what we just saw as millions of people used social media to back up successful Norwegian efforts to get the United Arab Emirates to release Marte Deborah Dalelv, a woman from Norway who was raped and then jailed in Dubai for having extramarital sex! The Norwegian Prime Minister was diplomatic and delicate and it all worked.

In Norway, of course, Conflict Resolution and Peace Research experts consult with the highest levels of government. In the US, we listen only to the Joint Chiefs, so good thing they sober up on occasion.
~~~~~~~~~~~~~~~~
Tom H. Hastings is PeaceVoice Director and teaches in the Conflict Resolution program at Portland State University.