“Even the deregulation-happy Wall St. Journal sounded shocked: “The Department of Energy is proposing to allow the sale of tons of scrap metal from government nuclear sites — an attempt to reduce waste that critics say could lead to radiation-tainted belt buckles, surgical implants and other consumer products.””

Even the deregulation-happy Wall St. Journal sounded shocked: “The Department of Energy is proposing to allow the sale of tons of scrap metal from government nuclear sites — an attempt to reduce waste that critics say could lead to radiation-tainted belt buckles, surgical implants and other consumer products.”

Having failed in the ‘80s and ‘90s to free the nuclear bomb factories and national laboratories of millions of tons of their radioactively contaminated scrap and nickel, the DOE is trying again. Its latest proposal is moving ahead without even an Environmental Impact Statement. Those messy EISs involve public hearings, so you can imagine the DOE’s reluctance to face the public over adding yet more radiation to the doses we’re already accumulating. It would be a pretty hard sell, what with dental X-rays, medical X-rays, mammograms, CAT scans, PET scans, radio-isotope “seeds” and cocktails, food irradiation, every-day releases of radioactive gases and water from 104 nuclear power reactors, major releases like Fukushima, radon from rocks, whole-body X-rays at airports (that you can refuse) and cosmic rays during flights.
Not long after Chernobyl spread radiation around the world in 1986, the National Council on Radiation Protection doubled its estimate of our annual radiation dose, from 170 millirems to 360. A few years ago it raised the estimate again, to 620 millirems per year. The agencies that both create radioactive waste and estimate the radiation doses it gives to us, say the latest increase is due mostly to rapid growth in the use of medical X-rays and radio-isotopes in medicine. Should the DOE be allowed to haphazardly add still more?
Still, the DOE wants to deregulate and actually sell 14,000 tons of radioactive scrap metal (both volumetrically and topically contaminated) from the nuclear war system — uranium enrichment, plutonium extraction, etc. — and “recycle” the waste to the commercial clean scrap metal industry. From there, according to the watchdog group Nuclear Information and Resource Service, the radioactive stuff “could be turned into anything from your next pants zipper to baby toys.”

The DOE claims that potential radiation exposures to men, women and children would amount to a “negligible individual dose.” But anyone with a scrap of understanding of DOE and the Atomic Energy Commission knows not to believe a word of their assurances. The DOE famously said that rainwater would take thousands of years to seep through Yucca Mountain to a deep waste repository; it ran through the mountain in 40 years.

Even Some in Congress Object

Rep. Ed Markey wrote to Energy Secretary Steven Chu Jan. 11, calling the deregulation proposal “unwise” and urging that it “should be immediately abandoned.” Rep. Markey warned that radioactive products could “ultimately be utilized by pregnant women, children and other vulnerable populations.”

The DOE has never officially acknowledged — in spite of the National Academy of Sciences’ 2006 findings — that the same radiation dose does far more harm to women than to men. The drastically increased vulnerability of fetuses and infants is well known, but the whole population is nevertheless treated as the same big, young, Caucasian male (“reference man”) in most radiation risk assessments.

The DOE’s assessment of the proposal’s risks neglects the fact that exposures can go on for years from a watch or from medical implants or tableware or other items, leading to many millirems for many years. A millirem per year over 30 or 70 years is 30 or 70 millirems which is not trivial, NIRS points out.

The DOE currently bans the release of its radioactive scrap under a moratorium that began in 2000. The ban must not be lifted, but should be made permanent and expanded to keep all radioactive waste — irradiated plastic, concrete, soil, asphalt, etc. in addition to all metals — under control, out of commercial recycling and managed as the deadly hazard it is. NIRS.org has more details.
You can tell the DOE to continue to keep its radioactive metal out of the commercial metal supply, commerce, and our personal items. You can demand a full environmental impact statement. Comment deadline is Feb. 9, 2013. Email to: 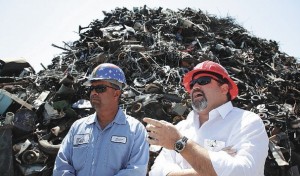 Operations Manager Sunil Singh, left, talks with Doug Kramer, president of Kramer Metals Inc., at the company’s Levin Yard in Huntington Park, Calif., on May 8. The company tries to keep out radioactive material sent to it with scrap metal. 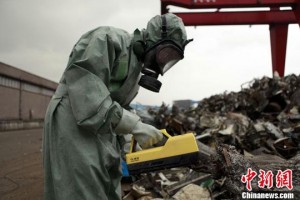 China Central Television reports that Zhejiang Province discovered more than 1,000 tons of Japan-imported radioactive scrap metal in Ningbo Harbor on China’s northeast coast. An investigation found the shipments’ content of CS-137, a dangerous radioactive chemical element, is more than double the regulated limit in China. The scrap metal departed from Port of Chiba, about 230 kilometers from Fukushima, where Japan suffered triple nuclear reactor meltdowns in March 2011 following a 9 magnitude earthquake.