Boy Scouts: Use the Oath to End Your Commanders’ Bigotry 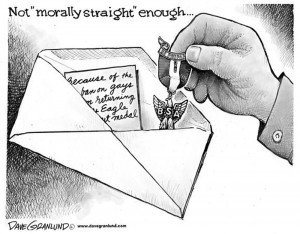 “The camping and knot-tying club Boy Scouts of America has reaffirmed its discriminatory exclusion of about 10 percent of all boys — the gay ones — and of any out lesbians who volunteer as Cub Scout den mothers. The BS’s flagrant bigotry is rationalized and accepted, “unanimously” we are told, by its military-style leadership based in Irving, Texas.”

For the full article:
Boy Scouts: Use the Oath to End Your Commanders’ Bigotry
636 Words
By John LaForge

The camping and knot-tying club Boy Scouts of America has reaffirmed its discriminatory exclusion of about 10 percent of all boys — the gay ones — and of any out lesbians who volunteer as Cub Scout den mothers. The BS’s flagrant bigotry is rationalized and accepted, “unanimously” we are told, by its military-style leadership based in Irving, Texas.
BS policy, renewed in July, says, “… we do not grant membership to individuals who are open or avowed homosexuals or who engage in behavior that would become a distraction to the mission of the BSA.” Sorry boss, but discrimination, homophobic bias and the avalanche of negative press distract from the mission.

Today — after the U.S. military has ended its official policy of lying (Don’t Ask, Don’t Tell) which kept thousands of service members in permanent fear of outing and expulsion — a large group of Eagle Scouts are publicly disowning their awards and returning their medals in protest of the prejudice. If I could find mine, I’d happily add it to the pile of discards in Texas.
Ever since I accepted it from Minnesota’s Troop 22 in 1974, I’ve received an annual invitation to contribute to the Eagle Scout Banquet Fund. I reply to this request every year with an invitation of my own. I remind the BS that I will donate after first reading of a public renunciation of both the group’s official homophobia and its pious intolerance of non-religious free thinkers, and then only after I see in print a public apology to the GLBTQ and agnostic and atheist communities for Scouting’s long-standing discriminatory policies along with an new and open membership invitation to one and all.
While current and former Scouts have all promised to be “loyal,” as well as trustworthy, thrifty, helpful, etc., the group’s directed embrace of discrimination, as Sam Stites wrote in Willamette Week, begs the question: Loyal to the Texas Chain of Command, or loyal to the protection of constitutionally protected civil and human rights? The BS Oath’s pledge to be “Obedient” says clearly: “A Scout … obeys the laws of his … country” which today generally forbid discrimination.
While map reading and orienteering are two of the most interesting and challenging joys of scouting, the BS looks today like a Flat Earth Society claiming the sun revolves around us. While the country as a whole is embracing inclusion and respect of all people, BS executives in Texas have decided “to teach division and intolerance,” as Chad Griffin of the Human Rights Campaign said.
By its own definition of loyalty, the Oath says a Scout is “true to his family, Scout leaders, friends, school and nation.” If this list is prioritized, it’s clear that Texas demands loyalty to its bizarre, archaic edicts before a Scout should think of his country or the law of the land. No. Scouts need to make a choice for fairness and inclusivity, even in the face of official BSA ignorance and paranoia.
The Oath says Scouts are to be Brave: “He has the courage to stand for what he thinks is right even if others laugh at or threaten him.” Reverent: “He respects the beliefs of others.” Kind: “He treats others as he wants to be treated.” Friendly: “A Scout is a friend to all. He seeks to understand others. He respects those with ideas and customs other than his own.”
Until Texas gets it right, Scouts everywhere should follow their Oath and rebel. Every Scout in the country should refuse all further meetings, volunteer work, honors, contributions or fundraising until the commanders’ exclusionary bigotry is apologized for and made null and void.
~~~~~~~~~~~~~~~~~~~~~~~~~~~~~~~~
— Former Eagle Scout John LaForge is on the staff of Nukewatch, a nuclear watchdog and environmental justice group in Wisconsin.