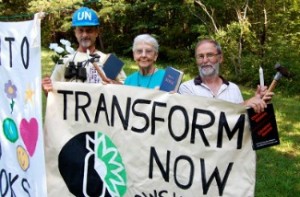 “Three nuclear weapons abolitionists, including one from Duluth, Minnesota, who snuck into the not-so-high-security Y-12 nuclear weapons site in Oak Ridge, Tenn. in July, — after merely snipping their way through chain-link fences — have humiliated the National Nuclear Security Administration.”

Three nuclear weapons abolitionists, including one from Duluth, Minnesota, who snuck into the not-so-high-security Y-12 nuclear weapons site in Oak Ridge, Tenn. in July, — after merely snipping their way through chain-link fences — have humiliated the National Nuclear Security Administration.

The militarized NNSA is supposed to keep all uninvited persons away from the extremely dangerous and highly volatile uranium-235, uranium-238, beryllium, lithium deuteride and other deadly materials that are machined by Y-12 workers into thermonuclear or hydrogen bombs — what the White House and presidential hopefuls call “options” always “on the table.”

On July 28, these muscular security teams and state-of-the-art barricades couldn’t even keep out an 82-year old nun, Sr. Megan Rice of New York City, and her two late-middle-aged pacifist accomplices, Michael Walli, 63, of Washington, DC, and Greg Boertje-Obed, 57, of Duluth.

The daring occupation and “naming with blood” of the H-bomb factory by the three, who called their action Transformation Now Plowshares, has inspired international headlines after first being ignored by all but the local press.

One reason for news coverage stretching from Toronto, Ontario to Sydney, Australia, is that Y-12’s managers decided in their embarrassment to shut down their sociopathic operations for a week. At an Aug. 2 federal court hearing in Knoxville, Assistant U.S. District Attorney Melissa Kirby said, “They caused Y12 to be suspended for several days.” Y-12 authorities also ordered their “security” staff to take a refresher course.

Another reason for all the critical attention — something our nuclear war mafia hates as much as vampires hate daylight — is that the gravity of the Y-12 shut-down, along with the government’s wish to keep the interveners behind bars, moved prosecutors to up the charges. The three were at first charged only with federal trespass.

On Aug. 3, prosecutors added a felony count — “willful and malicious destruction or injury to a structure, conveyance, personal or real property” or its attempt — which carries a max of 5 years in prison, 3 years’ probation, and/or a $250,000 fine.

While convictions in these cases are historically slam dunks, it could be hard to prove that steel fences and factory buildings were “injured or destroyed.” It may be as hard a case to make as the one attempted by prosecutor Kirby Aug. 3, when she argued that the peaceniks should be kept in jail because they are “dangers to the community” and “flight risks.”

Presiding Magistrate Judge G. Clifford Shirley might have wondered who was endangering whom, when the health of Sr. Rice was brought to his attention. Her counsel Francis Lloyd told the court she was suffering from hypothermia, possibly brought on by the Blount County jail’s failure to provide the octogenarian with her prescription medicine. The attorney had already draped his raincoat over Rice, when Shirley took a recess. The magistrate then “appeared with a space heater to direct on Megan, and a staff person found a sweater and blanket,” according to eye witnesses.

Mag. Shirley had earlier told the prosecutor that to keep the three in custody, she needed to show evidence of a crime of violence, a serious drug crime, a prior felony conviction, a minor victim or use of a firearm, a serious risk of flight, or obstruction of justice. ADA Kirby came back a day later with felony charges.

Still, Shirley dismissed the “flight risk” claim easily, saying about Michael Walli that in the past he “appeared when required, so that doesn’t seem to be an issue.”

When the magistrate asked Rice and Walli if they wished to be released, both said they wanted out. For his part, Boertje-Obed offered that he would accept the strict release conditions only if the court would “declare nuclear weapons a war crime.” Shirley said he was not likely to do that, and — after Greg made clear that he could not accept punitive restrictions as if he’d already been convicted — the man sent him back to jail mid-hearing.

Prosecutor Kirby then spoke at length, dictating fearsome pretexts to keep all three in jail, even asserting that their action was a “crime of violence.” Kirby got worked up enough to hiss, “Their description of nonviolence is not right. They are willing to die for what they believe. That’s violence.”

Mag. Shirley explicitly rejected this screed, noting that the willingness to risk one’s life does not make one violent. Ultimately, he decided that prosecutors had failed to show that the defendants posed any danger and released them subject to a long list of conditions.

To see if nuclear weapons can be put away as a danger to the community, trial is set for October 9 in Knoxville.

— John LaForge is on the staff of Nukewatch. Ralph Hutchison, with the Oak Ridge Environmental Peace Alliance, contributed reporting for this article.