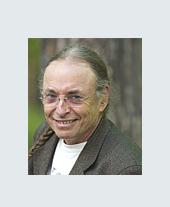 “This has become the New Surrealpolitik, this Trump phenomenon. I understand how monomaniacal Trump can believe he could be president of the United States but I fail to understand how American voters can actually cast a ballot for a racist, xenophobic, ignorant, gauche, arrogant billionaire.”

For the full article:
Trumped
460 words
By Tom H. Hastings

This has become the New Surrealpolitik, this Trump phenomenon. I understand how monomaniacal Trump can believe he could be president of the United States but I fail to understand how American voters can actually cast a ballot for a racist, xenophobic, ignorant, gauche, arrogant billionaire.

It is clear that Trump has no policy savvy. He can barely identify a current public policy that doesn’t relate to what some obsequious staffer feeds to him.
His misinformation, compounding contradictions, and racial slurs regarding Latina/os are profoundly painful. His dehumanizing mischaracterizations of nonwhite nonChristians, of Muslims in general, and Syrian refugees in particular are simply unAmerican.

Trump’s attitudes toward and relationships with women both individually and collectively are shameful.

Imagining Trump with his thumb on the nuclear button is horrifying and a betrayal of our entire human history and future.

If you believe in workers’ rights you cannot intelligently support Trump with his record of predatory capitalism and ruthless exploitation of the most vulnerable.
For anyone who believes our elected officials should possess integrity, a vote for Trump is impossible.

We are descending in world opinion and global credibility every day we allow Trump to continue to march toward viable candidacy for President of the United States of America. Do we seriously wish to be the embarrassment of the Earth?

The money Trump inherited, if left in an average mutual fund and never touched, would be billions more than what he has in his fortune today. His business acumen is actually lousy. Losing, losing, losing.

Education? Here he is: “I love the poorly educated.” I do not want that man to have a say in the education of my grandchildren or anyone else’s. My stars!
Trump will make negotiating on the global level essentially impossible. He has already insulted the majority of the world powers–leadership that can help or hurt Americans. A vote for Trump is a vote to deepen alienation across the world from America and–since so many vote for him–Americans as people.

Seriously? America has taken hits–Ronald Reagan was a chickenhawk Cold Warrior B-movie actor and a president who–in the words of one commentator–“believed the last glib person who talked to him.” This led the US closer to nuclear annihilation than any time since the Cuban missile crisis. Bush the W–led by the nose by Cheney–lied and stumbled our military into disasters thousands died for and the rest of us still pay for. Trump the Novice–lacking in everything but hubris–would bring us into irreversible catastrophic endgames that would literally threaten the existence of the US and all of us.

I’ve never seen such a display of voter incompetence as the numbers who have gone for Trump. He is the most dangerous version of Bozo the Clown I’ve seen in 55 years of political observation. Just sayin’.
~~~~~~~~~~~~~~
Dr. Tom H. Hastings is PeaceVoice Director.