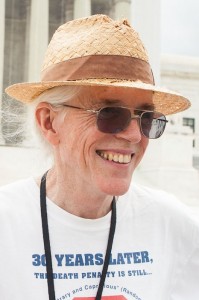 “In the fiscal calendar this is Tax Time. In my church calendar it is the season of Easter, the holiest time of the year for all Christians. For my Jewish brothers and sisters it is Passover season. By my garden’s reckoning it is Spring.”

For the full article:
1040 For Peace
519 Words
By Jack Payden-Travers

In the fiscal calendar this is Tax Time. In my church calendar it is the season of Easter, the holiest time of the year for all Christians. For my Jewish brothers and sisters it is Passover season. By my garden’s reckoning it is Spring.

There is a certain irony that resurrection time parallels Tax Day for I have just meditated on gospel passages reminding me of Jesus driving the money changers out of the temple followed by his arrest, judgment and execution by the state. It is with this background that each year I am expected to file my federal taxes to share the costs of government expected of all citizens. I do file each year but each time I find myself asking, as I am sure you do also: What does my tax dollar buy?

Unfortunately I have found ever since I began working that the U.S. tax dollar is disproportionately paying for war: past, present and future. This year that amounts to 40 percent. During the Vietnam War, I was issued a Draft card and notified to report for military duty. It was my obligation to fight. I reported to the Armed Forces Entrance and Examination Station at 39 Whitehall Street in lower Manhattan but when issued an order to “take one step forward and join the finest fighting force the world has ever seen, the United States Army,” I refused.

My mother thought I was crazy. She told me I had ruined my life, dishonored our family, and deserved to be prosecuted and put in jail. Five years and $10,000.00 was the penalty for induction refusal.

I had wanted to join the military and fight in ‘Nam when I graduated from high school but a college scholarship and family pressure sent me off to college. I encountered a History professor who had served in the German Army during World War II. The question he asked each of us was: “What would you have done, if you had been ordered to serve in Hitler’s army during that period?”

On my Induction day in 1970 I answered that question by refusing to step forward and fight in what my conscience told me was an unjust war. As fate would have it, I am once again confronted with that challenge each April 15th when I am asked to pay my taxes with the largest percentage going to current and past and future wars. As a conscientious objector to war, I believe that paying for war is participation in war. That is something that my religious beliefs forbid.

And so this year as I have done for four decades I will file my taxes. I will pay for roads, health care, social programs, government operations, education, etc. But I will also refuse a portion of my tax debt. I will withhold $10.40 of my taxes owed as a symbol of my refusal to participate in war with either my body or my money. I will join with 1040 for Peace members who choose to support peaceful alternatives to war by donating that money to groups that work for peace and justice.
~~~~~~~~~~~~~~~~~~~~~~~~
Jack Payden-Travers, Lynchburg, VA, writes for PeaceVoice serves as the Director of the National Campaign for a Peace Tax Fund in Washington, DC.