“On November 7, 2014, while visiting Kabul, The Secretary General of NATO, Jens Stoltenberg, noted that NATO will soon launch a new chapter, a new non-combat mission in Afghanistan. But it’s difficult to spot new methods as NATO commits itself to sustaining combat on the part of Afghan forces.”

For the full article:
Uncomplicated, in Afghanistan
901 Words
By Kathy Kelly

On November 7, 2014, while visiting Kabul, The Secretary General of NATO, Jens Stoltenberg, noted that NATO will soon launch a new chapter, a new non-combat mission in Afghanistan. But it’s difficult to spot new methods as NATO commits itself to sustaining combat on the part of Afghan forces.

Stoltenberg commended NATO Allies and partner nations from across the world, in an October 29th speech, in Brussels, declaring that for over a decade, they “stood shoulder to shoulder with Afghanistan.” According to Stoltenberg, “this international effort has contributed to a better future for Afghan men, women and children.” Rhetoric from NATO and the Pentagon regularly claims that Afghans have benefited from the past 13 years of U.S./NATO warfare, but reports from other agencies complicate these claims.

UNAMA, the United Nations Assistance Mission in Afghanistan, found that in the first six months of 2014, combat among the warring parties surpassed improvised explosive devices (IEDs) as the leading cause of conflict-related death and injury to Afghan civilians.

This “disturbing upward spiral” has meant the number of children and other vulnerable Afghans killed and wounded since the beginning of the year rose dramatically and “is proving to be devastating.”

Stoltenberg’s assurance of NATO’s positive contribution to civilian welfare in Afghanistan is also undermined by a recently issued Amnesty International report examining NATO/ISAF operations. These operations include air strikes, drone attacks and night raids, all of which have caused civilian deaths and also involved torture, disappearances, and cover-ups. The report, entitled “Left in the Dark,” gives ten chilling and horrific case studies occurring between 2009- 2013. Amnesty International states that two of the case studies “involve abundant and compelling evidence of war crimes.”

I wish that NATO’s commander could have joined Afghan Peace Volunteers (APVs) that same week in Afghanistan as they visited an extraordinarily sustainable project, called “Emergency.” This Italy–based network of hospitals and clinics has been particularly remarkable for effectively saving and improving the lives of many Afghan people, over the past 13 years, while at the same time rejecting any form of war or use of weapons within its facilities.

At the entrance to any one of Emergency’s clinics or hospitals, a sign at the door says “No Weapons Allowed.” A logo banning guns is next to the Emergency logo. Although they work in one of the most intense war zones in the world, Emergency staff, including security guards, reject any use of weapons inside their facilities. 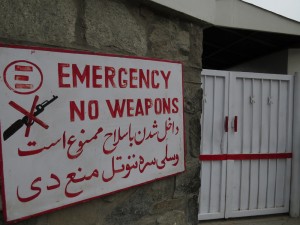 At the gate of Emergency Hospital, Kabul

Yusof Hakimi, the nurse in charge of Emergency’s ICU in the Kabul hospital, assured us that the ban is strictly upheld. A child isn’t allowed to carry a plastic toy gun inside the hospital premises. No one can wear camouflage clothing. “Even the president of Afghanistan cannot carry a gun inside our hospitals!” says Luca Radaelli, the medical coordinator of Emergency’s hospital in Kabul. He added that it’s not easy to maintain a facility where wars are banned. “But,” he adds, “everyone understands the purposes and respects the rules.”

They’ve learned ways of providing security without the use of weapons. One such way involves an absolute commitment to neutrality.

They never take sides in the various conflicts that plague Afghanistan.
In fact, they don’t even ask if a patient belongs to one side or another.

Most NGOs in Afghanistan arrange for their staff to travel in heavily armed vehicles. But unarmed Emergency ambulances travel through war zones, in multiple directions, across the country. “We don’t have armed guards,” says Luca. “We don’t have bullet proof cars. We don’t change our routes because,” he explains in his clear, matter-of-fact style, “we have never been targeted.”

Luca says they acquire, and maintain, security through their reputation. Since they never charge any patient for health care, they could not be accused of trying to make a profit.

They also pursue strong diplomatic conversations with each group affected by their work, such as new workers, contractors, local government officials, and religious leaders. They explain their policy of maintaining neutral independence toward everyone involved. “If you provide something good, something skilled, and it is free of charge,” he adds, “there is no need to protect yourself. People won’t get angry.”

If NATO and U.S. commanders took a fraction of what they have spent securing this region by violence- (the Pentagon has requested 58.5 billion dollars for Fiscal Year 2015 in Afghanistan)- and spent that instead to help people harmed by the ravages of war, could non-combat projects, such as Emergency’s, start to work? There are numerous, obvious solutions to problems in Afghanistan which NATO countries could actually consider, or even attempt, if the alliance was actually there to help improve the quality of life for Afghan people.

One solution is to establish health care programs similar to what Emergency has created.

However, Emergency isn’t in Afghanistan to point out a sane path through disaster to all the actors, here and abroad, who seem unlikely to discard paths of suicidal hatred and ignorance.

In Luca’s view, Emergency is simply what a healthcare institution ought to be.

“It grows from a very simple idea. Provide high quality service for everyone, not thinking about profit, but just about patients’ health.”

“What is so complicated?” he asks.

We might address a similar question to NATO Sec. Gen. Jens Stoltenberg: A new, non-combat mission, in Afghanistan, one that rejects weapons and war. What would be so complicated?
–end–
Kathy Kelly, Kathy@vcnv.org, writes for PeaceVoice and co-coordinates Voices for Creative Nonviolence (www.vcnv.org). While in Kabul, she is a guest of the Afghan Peace Volunteers (ourjourneytosmile.org)
This article first appeared on the Telesur English website