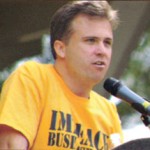 For the full article:
10 More Years in Afghanistan
645 Words
By David Swanson

Afghan President Hamid Karzai is refusing to sign the deal. Here is his list of concerns. He’d like the U.S. to stop killing civilians and stop kicking in people’s doors at night. He’d like the U.S. to engage in peace negotiations. He’d like innocent Afghan prisoners freed from Guantanamo. And he’d like the U.S. not to sabotage the April 2014 Afghan elections. Whatever we think of Karzai’s legacy — my own appraisal is unprintable — these are perfectly reasonable demands.

Iran and Pakistan oppose keeping nine major U.S. military bases in Afghanistan, some of them on the borders of their nations, until the end of time. U.S. officials threaten war on Iran with great regularity, the new agreement notwithstanding. U.S. missiles already hit Pakistan in a steady stream. These two nations’ concerns seem as reasonable as Karzai’s.

The U.S. public has been telling pollsters we want all U.S. troops out of Afghanistan “as soon as possible” for years and years. We’re spending $10 million per hour making ourselves less safe and more hated. The chief cause of death for U.S. troops in this mad operation is suicide.

When the U.S. troops left Iraq, it remained a living hell, as Libya is now too. But the disaster that Iraq is does not approach what it was during the occupation. Much less has Iraq grown dramatically worse post-occupation, as we were warned for years by those advocating continued warfare.

Humanitarian aid to Afghanistan — or to the entire world, for that matter, including our own country — would cost a fraction of what we spend on wars and war preparations, and would make us the most beloved nation on earth. I bet we’d favor that course if asked. We were asked on Syria, and we told pollsters we favored aid, not missiles.

We stopped the missiles. Congress members in both houses and parties said they heard from more people, more passionately, and more one-sidedly than ever before. But we didn’t stop the guns that we opposed even more than the missiles in polls. The CIA shipped the guns to the fighters without asking us or the Congress. And Syrians didn’t get the aid that we favored.

We aren’t asked about the drone strikes. We aren’t asked about most military operations. And we aren’t being asked about Afghanistan. Nor is Congress asserting its power to decide. This state of affairs suggests that we haven’t learned our lesson from the Syrian Missile Crisis. Fewer than one percent of us flooded Congress and the media with our voices, and we had a tremendous impact. The lesson we should learn is that we can do that again and again with each new war proposal.

What if two percent of us called, emailed, visited, protested, rallied, spoke-out, educated, and nonviolently resisted 10 more years in Afghanistan? We’d have invented a new disease. They’d replace the Vietnam Syndrome with the Afghanistan Syndrome. Politicians would conclude that the U.S. public was just not going to stand for any more wars. Only reluctantly would they try to sneak the next one past us.

Or we could sit back and keep quiet while a Nobel Peace Prize winner drags a war he’s “ending” out for another decade, establishing that there’s very little in the way of warmaking outrages that we won’t allow them to roll right over us.
~~~~~~~~~~~~~
David Swanson is syndicated by PeaceVoice. His books include “War Is A Lie.” He hosts Talk Nation Radio.