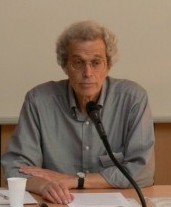 “In a number of ways, gun control issues are remarkably similar to arms control issues. Gun controllers argue that the availability of guns facilitates the use of these weapons for murderous purposes. Arms controllers make much the same case, asserting that weapons buildups lead to arms races and wars. Both stress the imperative of weapons controls in an era of growing technological sophistication, pointing out that assault weapons sharply increase dangers domestically, just as nuclear, chemical, and biological weapons increase the dangers of a holocaust globally.”

In a number of ways, gun control issues are remarkably similar to arms control issues. Gun controllers argue that the availability of guns facilitates the use of these weapons for murderous purposes. Arms controllers make much the same case, asserting that weapons buildups lead to arms races and wars. Both stress the imperative of weapons controls in an era of growing technological sophistication, pointing out that assault weapons sharply increase dangers domestically, just as nuclear, chemical, and biological weapons increase the dangers of a holocaust globally.
Weapons enthusiasts have also adopted a common approach. The National Rifle Association insists that weapons are harmless. According to the NRA, “people” are the problem, which can be solved by “good guys” using guns to intimidate or kill “bad guys.” Adopting much the same position, the military-industrial complex and its fans contend that the people of their nation are “good,” and need superior armaments to deter or destroy the “bad” people.
In this debate, the weapons critics have a better case. Even if one leaves aside the difficulty of distinguishing between “good” and “bad” people, there is copious evidence indicating that, all other things being equal, the more access people have to weapons, the more likely they are to use them. States and nations that have strict gun control laws have less gun-related violence than those that don’t. Furthermore, heavily armed countries are more often at war than are militarily weaker nations. Indeed, nations flooded with weapons are particularly prone to bloodbaths. Just look at Syria, the Congo, Mexico … and the United States!

Although weapons enthusiasts in the United States lean upon other justifications for armed might, these are even flimsier. The much-cited Second Amendment to the Constitution deals with a “well regulated militia” — an outdated institution that has no connection to today’s gun-owners. Moreover, the alleged patriotic necessity of resisting the U.S. government by force of arms is not only unconstitutional, but treasonous.

Even so, the weapons enthusiasts have spotted a genuine weakness in the case made by the weapons controllers. Specifically, while weapons exist, it is necessary to prevent or restrain armed aggression – by individuals or by nations. The fact that the enthusiasts’ “solution” – throwing more weaponry into the mix – merely exacerbates the problem cannot hide the existence of the problem. So what, in these circumstances, should be done about it?

Preventing or restraining armed aggression needs to be tackled not only by arms control and disarmament, but also by just and effective governance on the local, national and international levels. To some degree, this job has been accomplished within many nations. Particularly when countries have representative governments, equitable laws, an impartial judiciary, fair policing, an accessible mental health care system, and a high level of social well-being, conflicts within them can often be settled short of resorting to armed violence – at least if they are not awash in guns.

The issue is trickier on the international level, where governance is a much newer and more rudimentary phenomenon. In this case, there is no alternative to supporting the development of global institutions that will replace the rule of force with the force of law. Clearly this transformation will require scrapping aggressive action by individual nations, as well as vigilante action by groups of nations. Above all, it will require developing the United Nations as the final arbiter and resolver of international disputes.
As many people of goodwill recognize, the United Nations has shown the world the path that should be taken toward eradicating poverty and disease, defending human rights, and resolving conflicts among nations. The problem with the United Nations is that it is often too weak to move the world very far in this direction.

If, on the other hand, the United Nations were strengthened, it would not only provide a better means for the spread of international law, justice, and social well-being, but a more effective force for disarmament and world peace.

After all, this is the job for which the United Nations was created. And is it so unreasonable to provide the world organization with the appropriate authority to handle the task? In the Book of Isaiah, there is a well-known prophecy: “They shall beat their swords into plowshares, and their spears into pruning hooks; nation shall not lift up sword against nation, neither shall they learn war any more.” Today, a dramatic “Swords Into Plowshares” statue adorns the garden of the New York City headquarters of the United Nations, awaiting the day when that prophecy will be fulfilled.
~~~~~~~~~~~~~~~~~~~~~

Dr. Lawrence S. Wittner (http://lawrenceswittner.com) is Professor of History Emeritus at SUNY/Albany, author of “Working for Peace and Justice: Memoirs of an Activist Intellectual” (University of Tennessee Press), and syndicated writer for PeaceVoice.