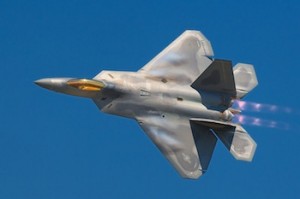 The F-22 Raptor. $150 million per aircraft, $66 billion for the program, never flown in combat, and subject to technical problems so serious the fleet was temporarily grounded twice! Supported by small-government Republicans! (Photo credit: Wikipedia.)

“One of the most widely-advertised but falsest claims in American politics is that the modern Republican Party stands for “small government.””

One of the most widely-advertised but falsest claims in American politics is that the modern Republican Party stands for “small government.”
In the distant past, leading Republicans were indeed sharp critics of statism. And even today a few marginal party activists, like U.S. Representative Ron Paul, have championed limited government — even libertarian — policies. But this is not at all the norm for the contemporary GOP.
For example, the Republican Party has stood up with remarkable consistency for the post-9/11 U.S. government policies of widespread surveillance, indefinite detention without trial, torture, and extraordinary rendition. It has also supported government subsidies for religious institutions, government restrictions on immigration and free passage across international boundaries, government denial of collective bargaining rights for public sector workers, government attacks on public use of public space (for example, the violent police assaults on the Occupy movement), and government interference with women’s right to abortion and doctors’ right to perform it.
And this barely scratches the surface of the Republican Party’s “big government” policies. The GOP has rallied fervently around government interference with the right of same-sex couples to marry, government provision of extraordinarily lengthy imprisonment for drug possession (for example, in the “war on drugs”) and numerous other nonviolent offenses, government interference with voting rights (for example, “voter suppression” laws), and government restrictions on freedom of information. Where, one wonders, is the Republican outrage at the U.S. government’s crackdown on people like Bradley Manning who expose government misconduct, or on whistle-blowing operations like WikiLeaks and its leading light, Julian Assange?
If the Republican Party were a zealous defender of civil liberties, as it claims to be, it would laud civil liberties organizations. But, in fact, the GOP has kept its distance from them. During the 1988 presidential campaign, George H. W. Bush, the Republican presidential candidate, publicly and repeatedly ridiculed his Democratic opponent as a “card-carrying member of the ACLU.”
Of course, the biggest arena of U.S. government action is the military. Here is where 57 percent of U.S. tax dollars currently go, thereby creating the largest national military machine in world history. A Republican Party that wanted to limit government would be eager to cut funding for this bloated giant. But the reality is that the modern GOP has consistently supported a vast U.S. military buildup. Today, its presidential candidate, Mitt Romney, assails his Democratic competitor for military weakness and champions a $2 trillion increase in U.S. military spending over the next decade.
Moreover, the Republican Party is an avid proponent of the most violent, abusive, and intrusive kind of government action — war. In recent decades, as U.S. military intervention or outright war raged in Nicaragua, El Salvador, Grenada, Panama, Kuwait, the Balkans, Afghanistan, Iraq, Libya, and other nations, the GOP was a leading source of flag-waving jingoism, as it is today in the U.S. government’s confrontation with Iran. This is not a prescription for creating limited government. As the journalist Randolph Bourne remarked in the midst of U.S. government mobilization for World War I: “War is the health of the State.”
Yes, admittedly, there is plenty of GOP support for small government when it comes to cutting taxes on the wealthy, limiting regulation of big business, gutting environmental regulations, weakening legal protections for workers and racial minorities, and slashing government funding for public education, public health, and social welfare services. But there is a common denominator to this kind of small government action. It is all designed to serve the interests of the wealthy and powerful at the expense of everyone else. Thus, the Republican Party opposes government alleviation of hunger through the distribution of food stamps, but supports government subsidies to corporations.
Just take a look at the platform that will emerge from the GOP national convention. There will be plenty of rhetoric about freedom and limited government. But the party’s actual policies will reflect a very different agenda.
For those people who can see beyond the deluge of slick campaign advertisements, it should be clear enough that the Republican Party’s claim to support “small government” is a fraud. That claim is only an attractive mask, designed to disguise a party of privilege.
~~~~~~~~~~~~~~~~~~~~~~~~~~~~~~~~~~~~~~~~~`
Lawrence S. Wittner is professor of history emeritus at SUNY/Albany. His latest book is “Working for Peace and Justice: Memoirs of an Activist Intellectual” (University of Tennessee Press).