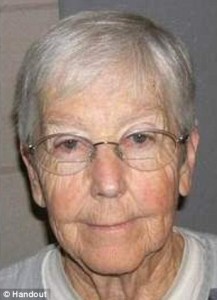 “This week I was in Culver City, California for a meeting with some others to discuss nonviolent people power. There were many great perspectives and insights. One of them is that it’s about the people–both numbers and commitment count.”

For the full article:
It’s all show biz
447 Words
By Tom H Hastings

This week I was in Culver City, California for a meeting with some others to discuss nonviolent people power. There were many great perspectives and insights. One of them is that it’s about the people–both numbers and commitment count.

I had never been to Culver City. It’s one of the original great movie making studio towns, part of greater Los Angeles. That juxtaposition was really perfect. I thought about my friend, Sister Megan Rice, and her two compatriots, Michael Walli and my other friend, Greg Boertje-Obed, who just made the Highly Enriched Uranium Y12 facility at Oak Ridge, Tennessee their focus of nonviolent resistance. HEU is sine qua non to nuclear bombs.
Rice is 82, a nun who has devoted her entire life to helping children in Ghana and Nigeria, and now to nonviolent resistance to militarism. She is both eloquent and full of spirited gentle outrage at the theft of so very much from the children of the world by the militaries of the world.

Rice and friends have shown the spotlight on this crime. She is a willing and able participant in the media effort to tell Americans, please, wake up! Get rid of these nuclear bombs and for Godssake, stop building more, as is happening in Tennessee. What the military is doing there is exactly what Iran is doing and Mitt Romney is backing up Benjamin Netanyahu’s plans to commit acts of war against Iran for potential HEU activities.

So the three of them cut through some security fences and poured their own blood on the grounds. Literally, that is all they did, but federal prosecutors have their knickers in a big national security twist over it.

Show biz is entertainment, but it’s also often done to persuade. Nonviolent action is show business, in that sense. Oscar Wilde was incorrect when he claimed there is no such thing as bad publicity (ask demonstration organizers what happens when some bonehead in a mask breaks a window and drives mass sympathies away from a movement), but Rice is simply a humble, lovable, knowledgeable figure and her passion and commitment have generated strongly helpful, positive publicity.

Sister Megan Rice, Greg Boertje-Obed, and Michael Walli will likely go to prison for 5-10 years for this nonviolent, selfless act. They know it was the right thing to do, they know that the court system will not see it that way, and they hope for our attention, interest, and actions on a mass scale, even if it’s only to contact our congressperson to urge no more funding for nuclear weapons. Rice asks, in the context of cutting so much help for our people, how we can spare the $billions for immoral, unusable weapons of mass destruction.